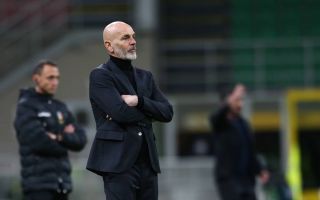 Pioli analyses what went wrong in attack and defence vs. Napoli and reveals what is weighing on Milan

Stefano Pioli bemoaned a lack of composure and intensity from his AC Milan side as they lost 1-0 to Napoli at San Siro tonight.

The Rossoneri went into the game buoyed by two positive recent results in the 2-0 win over Hellas Verona a week ago and the 1-1 draw against Manchester United at Old Trafford on Thursday night, but all that momentum went missing against Gennaro Gattuso’s side.

The most polite way to describe the performance would be wasteful, as Matteo Politano’s angled strike early in the second half was enough for the Partenopei to take all three points and throw the top four race wide open again.

The result means Milan are now three points closer to fifth place than they are Inter in first, in what is feeling increasingly like more of a top four battle than a Scudetto charge.

Pioli spoke to Sky Italia after the game, with his comments transcribed by MilanNews and translated below.

On the match: “The team was competitive, in the first half we didn’t concede so much. We didn’t play a great game on a technical level, too many wrong passes, then the goal we conceded when we were doing better than them. You can miss a pass in midfield but we had to be quicker to recover positions.”

On the standings: “We lost an opportunity, it could have been an exceptional week for us, we couldn’t repeat ourselves tonight. We had a good match against an excellent opponent. We need to think about the next match against a strong opponent, then Fiorentina. Inter did very well after being eliminated from Europe, we are looking to score as many points as possible.”

On tactics: “In the build-up we had to be faster, we could attack the depth, we lacked the technical precision but also the movements. In the goal we scored we lost a ball where we could manage the transition better, when you lack a bit of movement it becomes more it was difficult. The reaction was there, we had an important scoring ball with Leao, the penalty was more than there wasn’t. Something more was needed, unfortunately we didn’t succeed.”

On absences: “When there are a lot of little things you lose, we are talking about players who give us an important technical quality and a communicative presence, we have lost many games without a centre-forward, without Ibra, Mandzukic and Rebic. The team should only be praised. Inside the area opponent we could have done more, but the characteristics cannot be changed. Think of Inter without Lukaku, Lautaro and Sanchez, or Juve without Ronaldo and Chiesa. We played for a long time without Ibra and Rebic and yet we are there.”

On the problems between the lines: “We can’t do things halfway, when you do them halfway, you stretch the team and give space to Napoli. It takes more compactness, we haven’t always succeeded, I don’t think it’s Calhanoglu’s fault. We had to be more dangerous in the counters.”

On European commitments: “The Europa League is more tiring than the Champions, we returned at 3 in the morning on Friday. We wanted this path, I don’t give excuses, but it is clear that it weighs. We started in September, but what matters is the character. It is a defeat that hurts us, we are second in the standings, we would like to stay there even if it is not our initial goal. We try to recover energy and some players because Manchester are a very strong team.”