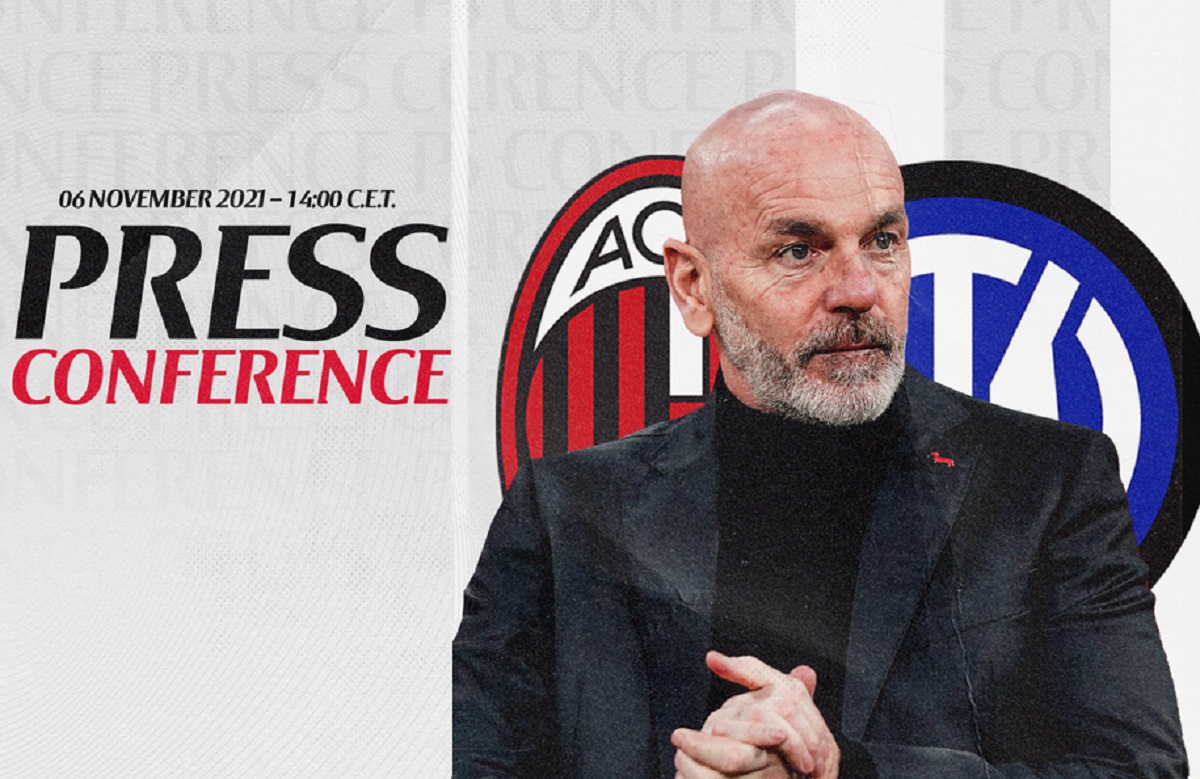 Pioli assures Milan are ‘ready’ for derby vs. Inter and reveals XI has been decided

Tomorrow evening, AC Milan will take on their city rivals Inter at San Siro, hoping to continue their impressive unbeaten run in the league. Despite the Champions League struggles, it should be a great game.

Stefano Pioli’s men managed to get just one point from the game against Porto mid-week and are now in a really tough situation in the UCL. In the league, on the other hand, they have been doing really well with 31 points in 11 games.

On the eve of the clash between Milan and Inter, Pioli spoke to the media at his usual press conference, as cited by MilanNews. He previewed the clash and spoke about various other topics as well.

After the UCL game, is the team fit enough to play an important game?

“Absolutely yes. The team is doing well, they are in optimal physical and mental conditions. They are ready for this derby.”

On the derby and on Ibra…

“The derby is always the derby, it’s a historic match. The important thing is to be there and then the important thing would be to win it. Zlatan is a phenomenon and he continues to show it in everything he does. He’s fine, he has found good condition. He comes from an excellent performance against Roma, he is motivated like all his teammates.”

What do Inter have that you don’t?

“Inter are the favourites (for the Scudetto) because they finished first last season and they know what it takes to keep winning. We are fine, the season is long but it is clear that Inter are a very strong and compact team.”

What are Inter’s weaknesses?

“We will try to find them tomorrow.”

Milan have not won the derby at home for five years…

“We prepare every match in order to win it. The intention is absolutely to win. We are only at the beginning of the season, it cannot be decisive for the final standings. It is a very important match for our environment and for our people, but it ends there. We cannot look too far ahead.”

Is being labelled the favourites a burden?

“I believe that in these matches there are no favourites, the standings no longer matter. In the derby we start from 0-0, we will have a stadium that will push us and we will have to try to play with continuity, attention and determination. We have our qualities and we want to play them from the beginning to the end of the game.”

“The season is too long, think of the last season. We won the derby in the first leg, but perhaps the return leg was decisive. Tomorrow is very important and we think about doing well.”

What has changed since the last 3-0 defeat against Inter?

Is it better to face this Inter or last year’s? “I will say it tomorrow evening. They have technical, physical and tactical qualities, players who can always find the bet. We too have our own way of being on the pitch, on paper I expect a match between the two teams with the two attacks that are better off. . Defending very well will give the possibility to resolve the partira “.

On the new stadium…

“Just yesterday I saw the film about the new Bernabeu. Beautiful, incredible, full of technology and an environment that can welcome the fans in the best possible way. I’m proud to be part of a club that has these innovative ideas that can make all Italian football grow as well. San Siro is history, the new stadium is the future.”#

How will you neutralise Brozovic? How are Ballo-Touré and Rebic doing?

“Brozovic is a very important and dynamic player for them, very good at verticalising. He is to be taken into consideration if we want to dirty their plays. We must try to be a team that does not wait, that tries to be aggressive. Rebic has recovered, he participated in the last two training sessions with us. Florenzi has also recovered, Ballo-Touré too. We’ll see Messias after the break.”

“It is believing in ourselves, playing with conviction and with confidence. Our path has been going on for almost two years, we have laid important foundations that will not collapse: from here we must move forward step by step. We want to go back to winning, in Italy and in Europe, we have to believe in our qualities and in our way of interpreting matches, even if obviously we will face difficulties. We believe in us, when you believe in what you do you have to go beyond your limits. ”

Will they play Ballo-Touré and Krunic?

“I have already made my choices, I am very convinced. The players know them, you will see tomorrow.”

Is this the most important match for Pioli’s Milan?

Tonali’s call-up to the national team…

“It is a sign for the whole Milan environment. The club has chosen strong players, the boys are doing well. We are all nationals now, it is a sign of growth. If we want to be strong we must have strong players, our kids are growing a lot and we can still improve, with this attitude there will certainly be more growth.”

Where can this Milan still grow?

“In reading the moments of the match. Tomorrow is a match at the level of the Champions League, the level is high and if you make mistakes you pay. We will have to be even smarter. We are talking about a group that has been working together for a year and a half but many are young people and young people also need to make mistakes to grow.”

Who would you take away from Inter?

“I don’t take anyone off, I bet on mine absolutely. We have the qualities to play a serious game and try to win.”

Will there be another motivational speech tomorrow?

“Yes, but I always do it. It’s always about figuring out which keys to touch, but for tomorrow’s game, my job won’t be that difficult. What I’ve seen in these days makes me think I’m on track, motivated and stimulated.”

How do you prepare for a derby?

“You obviously have to have a strategy, then the emotional aspect can make even more of a difference than the tactical aspect.”

The Bergamo match as a benchmark?

“Yes, absolutely. Also for the characteristics of our opponents.”

The game is scheduled for 20:45 CET and it should be a very exciting game underneath the floodlights at San Siro. The iconic stadium, as we know, looks especially great at night and the fans will surely be in good form as well.

READ MORE: AC Milan Women vs. Empoli – Background, prediction and how to watch