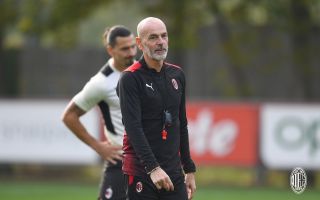 The AC Milan coaching staff granted the team Monday and Tuesday off, but they are busy preparing for Sunday’s crucial game against Napoli.

MilanNews reports how Stefano Pioli – together with his staff – has already started preparing for Sunday night’s match against Luciano Spalletti’s side. The Rossoneri head coach has one major doubt in his mind and that is about the attacking trident he should field behind the centre-forward Zlatan Ibrahimovic.

At the moment it seems as though Junior Messias and Alexis Saelemaekers are candidates for a starting spot in the big match at San Siro, while the real battle is the one between Brahim Diaz and Rade Krunic. That infers that Saelemaekers would be on the right, Messias down the middle and one of Krunic or Brahim on the left.

The recent struggles to score goals as freely as the opening games of the season has led to calls for things to be freshened up, so we could see a trio not used before, especially with Leao and Rebic out.