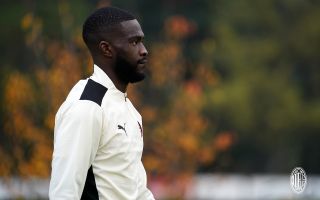 Stefano Pioli has confirmed that Fikayo Tomori has not just sustained a simple knock to his hit but also has a muscle problem too.

Tomori missed the game against Fiorentina on Saturday night at the Stadio Artemio Franchi after suffering a problem with his hip the day before the trip to Florence but at the time it was reported that he would be back for the game against Atletico Madrid in the Spanish capital tomorrow night.

His absence was certainly felt as Milan let in four goals in what was a night to forget for the Rossoneri, who saw their unbeaten start to the league season ended as they lost 4-3 against Vincenzo Italiano’s side.

“We will try to get him back for Sunday. From the hip problem came a problem with the obturator, a muscle that manages the movement of the hip,” he said (via MilanLive).