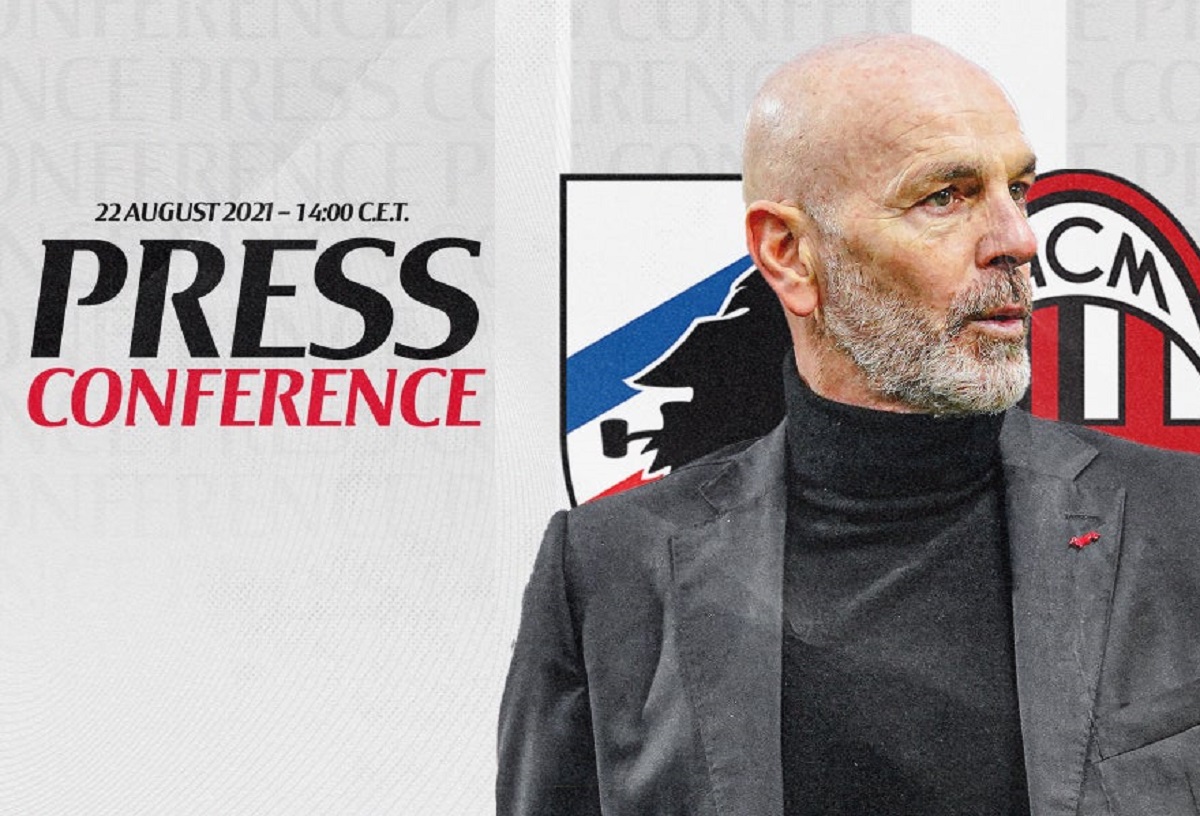 On the eve of the clash between AC Milan and Sampdoria, which is the Rossoneri’s season opener, Stefano Pioli spoke to the media at the usual press conference. The manager is confident that they will win tomorrow.

The Rossoneri didn’t lose a single game during pre-season and did well in all of the games. Therefore, there is optimism that they will start the season in the best way possible with a win at Sampdoria tomorrow.

Speaking to the media at Milanello, as cited by MilanNews, Pioli was asked about the game and the current condition of his own team. He also answered some questions on the Twitch channel just before the game, which is also translated below.

“The summer served us to try some other tactical situations even though we had already tried the form with two forwards last year. We will have to show that we have assimilated the game principles learned in recent months. We will try to assess the conditions of the players.”

On Leao and Tonali…

“Both the club and I have faith in Tonali and Leao. We found them much improved and I found them stronger. I expect a lot and I’m sure they will make a great contribution to the team.”

A message to the fans…

“The fans give us great support. We have to stay together and we will have to rejoice together in the good moments and suffer together in the most difficult ones. I’m sure, however, that the satisfaction will be more than the disappointments.”

Pioli, in addition to continuity, do you also look at innovation?

“Continuity is important for the principles of the game and we will have to bring this advantage onto the pitch. In modern football, however, you can’t just have one way to stay on the pitch and last year we looked to change game after game. I’m not bound to one game system but to our principles which are those of an attacking and fast football that requires great effort and team spirit.”

Your third season at Milan: is this the strongest team you have had?

“Yes I think I have found players who have grown in awareness – I have found Tonali and Rafa as more mature and strong players. We are still missing someone like Ibrahimovic and Kessie, out with an injury. Florenzi arrived yesterday and Bennacer is still a bit behind in the game condition.

“We are a strong group and if we combine humility and determination we will be able to have a great season. We will have to try to win every single match and try to have a good season, knowing that there are strong teams. We will then have the Champions League where we want to be protagonists.”

Will Tonali have to prove that he has grown up?

“We all have to show that we are at a certain level. I train high-level players and we expect a lot from them as well as from Sandro. He is a player who has a lot of work rate, who takes more responsibility in his plays. The difficulties encountered will help him to grow but we expect high-level performances. He will have constant and continuous growth.”

Have you talked to Donnarumma and does Maignan have the qualities to replace him?

“I thanked all the players who made us have a great season last year. I’m delighted with Mike. He’s a great guy, curious to understand the game’s storylines. He is a very strong goalkeeper who will give us a great contribution.”

What do you expect from Sampdoria?

“We have watched friendly matches. They are a team that defends well and that has quality in the attacking department. It is a complicated and difficult opener. We want to have a great game and we have prepared well.”

How do you see Ibrahimovic?

“Physically he is better even if he has not yet worked with the team. Next week will be important for him and if he goes as we all hope with the break, he will be back in the group. Ibrahimovic will always be our technical and charismatic leader and he is a decisive player for the team. He can’t wait to train with his teammates.”

How will this Milan change?

“It will have to be a self-possessed Milan. Even when the games are difficult, we have to maintain our identity and our philosophy of play. The directors are active and the transfer market is not over, we will see who arrives. We are a strong team that has grown in the field. Words will have to turn into facts and I am positive and aware of coaching a strong team.”

Calhanoglu was the protagonist with Inter. Is the need for a playmaker even more evident?

“We are not looking for a similar midfielder but we want to improve the team. The club is very present and if there is the possibility of intervening, the management will intervene. We already have players who can give ideas in the complicated moments of a match.”

Kessie has had a particular summer. How is he and can you be calm about the renewal?

“Kessie had a particular summer. He got married, went to the Olympics and came back and did the physical tests which were the best on the team. There is a will on both sides to continue together. I see a peaceful player and one who can’t wait to continue with us.”

Is there a risk of being left without an attacking midfielder?

“I think the judgments will be done on August 31st. I am focused on tomorrow’s match. I will field a competitive team then we will give the judgments at the end of the market.”

Were there any evaluations on the captain’s armband?

“The captain is Romagnoli, this has never been in question. In a team, it’s very important to have responsible players who are united, enthusiastic and have the desire to do well. This is why I have a lot of confidence in them.”

How are you on the eve of the clash?

“I am excited because I am in a great club with great ambitions. I am convinced of our qualities and of what this group can give. I am excited to find the fans again and I really want to start over.”

Are there any more signings planned for the midfield?

“The focus is always on the market but for me, it should have ended before the start of the season. Surely on the 31st, we will be competitive enough for our ambitions and qualities. We have to show where we can go.”

Are you satisfied with the athletic condition of the team?

“Apart from Franck’s unexpected injury, I think we did all the things as planned. We didn’t have many friendlies because we wanted to work on other situations. We will improve along the way, playing continuously and we will be ready to play every 3 days with the arrival of the team in Champions League.”

What ideas do you have to keep this Milan alive?

“The guys know what we are working on. We will often change the types of construction and finalization. It is always a work in progress to continue to grow and keep the players alive and stimulated.”

The game is scheduled for 20:45 CEST tomorrow evening and you can take a look at the expected XIs here. Hopefully, as said, Milan will take the three points with them from Stadio Luigi Ferraris.

READ MORE: Florenzi takes part in Sunday training and will travel with squad for Samp game