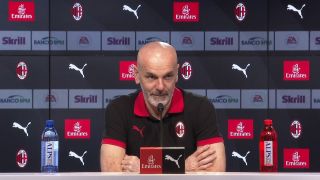 On the eve of the Derby Della Madonnina, which will be the biggest in many many years, Stefano Pioli spoke to the media at the usual press conference. Despite Milan’s recent form, the manager is very confident.

The Rossoneri are the underdogs in this game even though derbies are notoriously hard to predict, as form rarely matters that much. Having won the reverse leg, Pioli’s men could make it 2/2 and boost their confidence a lot.

At the press conference, as cited by MilanNews, the manager was asked about the game and the general situation surrounding the team. As mentioned, he’s confident in his team despite a few performances that left a bitter taste.

Pioli’s opening on the passing of Bellugi…

“We have just heard of the tragic news of Bellugi’s death, we would like to offer condolences to his family.”

This morning the fans made their presence felt…

“Our fans are really special, it’s a shame not to be able to play in a full San Siro, they are always close to us, they give us a lot of support, a lot of strength, I appreciated Milan’s virtual derby initiative. We hope it will be the last derby without fans.”

This derby comes after a long journey…

“I have always believed a lot in our work, in the ambition of this club, we have started a path that is giving us excellent results, we are playing a derby that has not been seen for a very long time. We are willing to do well in this match.”

What is the tactical key?

“The two teams have a nice and clear identity. The previous derbies have always been balanced, with several scoring chances. Tomorrow the team that will have more compactness and that will be able to be more precise will have more chances.”

“I’m absolutely convinced that he has enormous potential but he’s very young, in the first year at certain levels. He’s growing well, he will be a very strong player, but he’s showing his qualities. Even if you are young you have to live up to expectations, but he’s serene and motivated like his teammates.”

What happened in the last two games?

“In the last two games we have not raised our level of play, even the defensive phase has not been so solid and compact. Tomorrow we must be very careful and determined. We must have the right distances.”

The derby comes a month after the Ibra-Lukaku brawl…

“It would have been better if it hadn’t happened, but tomorrow is another match, there will be duels, clashes, it’s a heartfelt game, but there will also be great respect and professionalism.”

How important is tomorrow’s derby?

“It’s a very important game, we can get back in the lead. It won’t be a decisive match, but it’s very important. We prepared for it like this.”

Do you have any countermeasures in mind for the eventual pressing of Inter?

“In our preparation, we always think about how our opponents can come to attack us, we must be more lucid and precise. The opponents always allow some space, we must make the right choices.”

Can Milan play for a draw?

“The last two games were not the best, but they did not take away our convictions and certainties. They made us understand even more how to approach the matches. We will be strong and stronger than the last two matches. We will go out on the pitch to win.”

Can Ibrahimovic be the derby man this time too?

“Tomorrow must be a collective match, Milan must play as a team. It’s the collective that highlights the qualities of the individual. We must play well because we know how to do it, we have the technical quality. Our head is only on the derby.”

Could Tomori be useful to neutralise Lukaku?

“He is doing well, he has different characteristics from the others. But for technical and physical characteristics, Tomori is better at playing against Lautaro and Sanchez, he’s aggressive but doesn’t have the physicality to counter such powerful attackers. I’m very happy with his performances, yes.”

“He had a very minor injury, he was already working today. I hope it’s not a long absence, he was getting back in form.”

“He didn’t have a relapse, the muscle struggles to find elasticity, I hope to have him back soon.”

How to approach the derby…

“We must be determined and willing to try to win. We aim to enhance our qualities as a team.”

Is the goal still top four?

“The goal of Milan is to continue our path with which we are satisfied. We are happy to be the youngest, the surprise of the season. Our goal is to give our best then, in the end, we will sum up.”

How are the players who will be on the pitch tomorrow?

“Tomorrow I will field the players who are doing well, who are ready, many of them did not play on Thursday. Tomorrow’s team is competitive to be able to give their best.”

How was Milan’s approach to the derby?

“I have a lot of passion and emotion, we are preparing it well, there is the right concentration. The fans have been fantastic, we are doing everything possible to be able to prepare well. We are convinced that it’s the best preparation and that we have done everything to be ready for this challenge.”

The game is scheduled for 15:00 CET and with a win, Milan would reclaim first place in the standings. This is what makes this derby so big, as it was a long time ago both teams were at the top of the standings.

READ MORE: A decision has been made on Leao-Rebic battle for Milan vs. Inter