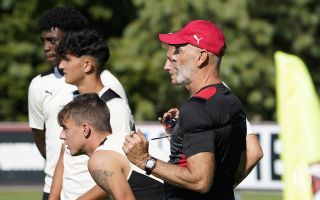 Pioli discusses why this Milan are the ‘strongest’ and reveals Ibra anecdote: “I’m talking today”

AC Milan head coach Stefano Pioli is dreaming big after he asserted that his side has what it takes to compete at the top.

The Rossoneri secured a second-placed finish in the 2020-21 campaign which marked their highest league placement since all the way back in 2011-12, and most important it signified a return to Champions League football after a seven-year absence.

Pioli was a guest of the ‘Champions under the stars’ event last night in Biella and answered some questions from Alessandro Alciato, a journalist for Sky Italia. He began by talking about Zlatan Ibrahimovic, the true leader of Milan’s resurgence alongside other important players like Simon Kjaer, as well as Pioli of course.

“He is a character in everything he does, he has great personality. Once, in the first season, he didn’t appreciate a substitution. He knocked on my office door and said ‘I’m talking today’. I stood in the corner and listened. The next day I told him ‘Zlatan, now I’ll explain why I did certain things’. And he accepted,” Pioli revealed (via MilanLive).

“It is easy to get along with him, we are two very direct people, we tell each other what we think. The goal of the meetings is always the good of the team. He is the first to stand in front of everyone and take responsibility for himself. He is a person of extreme intelligence and sympathy. He made us grow a lot and he still has a lot to do at Milan.”

Pioli also spoke about Ibra’s physical condition and on the possibility of seeing him paired with Olivier Giroud.

“He will come back soon, he is training well and I hope he will continue like this until Saturday, so he will be called up on Sunday. Him and Giroud together? Great players, with the right availability, can play together. They have different characteristics. Giroud is a point of reference in the area, Ibra is now an attacking director. When they are both at 100%, it will be possible to try.”

After finishing second last season there have been some question marks as to what the Rossoneri’s objective should be this time around, be that a Scudetto challenge or potentially just another top four finish.

“Milan was born to win. Then it is clear that it takes time, but my ambition and that of the boys is to win. We know the difficulties, the high level in Italy and how tough the Champions League will be, but at the same time we are very stimulated,” Pioli said.

“We have worked hard to achieve this, we must be excited to face this adventure. The jingle of the Champions League is important. The hymn as a ringtone? No, as a ringtone I have Zlatan who wakes me up.

“The current Milan is the strongest I’ve coached. The boys have grown up a lot and are aware of their strength. We have to think we can win every single match, then in the end we will see where we will arrive.”

The Rossoneri coach also discussed what happened at the European Championships when Christian Eriksen collapsed and Simon Kjaer showed all his leadership instinct.

“There was great anxiety, I thought the worst. What Kjaer did is not an everyday thing. I have never doubted his human qualities, but I must say that his clarity struck me. It happened to talk about it in the past, but not now. For Simon it is better to go through this moment with his friend.”

Next Wednesday evening will see AC Milan’s return to the Champions League against an opponent they know all too well in Liverpool, and Pioli is relishing the challenge.

“The emotion will be strong. We played in Manchester last season and it was good, even if without fans it made an impact. An exciting challenge against Liverpool. We return to the Champions League with enthusiasm, we must think of difficult matches as great opportunities, because if we are convinced we can overcome any obstacle.”