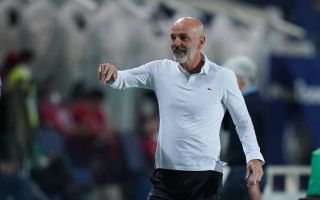 Pioli dishes out thanks and praises Milan’s ‘collective’ in declaring: “We deserved second place”

AC Milan head coach Stefano Pioli thanked the management, his players and his wife in reflecting on sealing a Champions League return.

Milan ensured that they will be playing Champions League football for the first time since the 2013-14 season with a colossal 2-0 win over Atalanta.

Milan went into the game knowing that only three points would guarantee a top four spot, with Juventus and Napoli facing favourable games against Bologna and Hellas Verona respectively.

In the end it would be a Franck Kessie penalty in the first half that would set the Rossoneri on their way, and they got a second spot kick in added time at the end of the second half that the Ivorian also tucked away.

The result also means that Milan leapfrog their Lombardy neighbours into second place for their highest finish since 2012.

Pioli was interviewed by Sky Italia at the end of the game, with his comments transcribed by MilanNews and translated below.

Mission accomplished, how did you achieve it? “We achieved it because we deserved it and we deserved second place in the standings. It was right, unfortunately we had thrown away last Sunday’s match point. I am really excited and happy. I have to thank the club for making us work spectacularly. Thanks to the managers, the technical area, the players, the collaborators and the fans who once again showed us today how much Milan is worth. We are satisfied to have them happy.”

Kessie the decisive man? “Never as tonight I believe it is right to enhance the collective beyond the individuals. When you have these satisfactions in a season it is also thanks to the players who have played less… Gabbia, Krunic, Dalot, Kalulu. Kessie is in the spotlight and deserves only the compliments for the season she has done.

“It is all we have done together, the strength not to break down in difficulties. I am very proud of the mental growth of the group. We played with Zlatan only 19 out of 38 games, taking away the champion from the other teams for half the season I would like to see what they would do. I thank the club, now there is satisfaction and we must enjoy it. I also thought that if we were fifth it would be a difficult summer. Now we enjoy it and then we will leave again.”

Have you ever wondered why you were better away from home?

“We asked ourselves, we tried to evaluate this situation well. We weren’t a team that made a lot of 1vs1s in the last quarter of the pitch. We miss the individual play when the teams close, in this data we are below average. We lacked some individual play. On the road, perhaps we found some more space, this is a situation that we will have to evaluate.

“I heard that this team took advantage of the absence of fans in the stadiums at least initially to find serenity, but I’m sure this team here with the enthusiasm of our fans at San Siro would have grown a lot. What the fans did for us this morning and the other times has filled us with warmth and passion, we have shown that we believe in it together with them. To conclude I want to wish my wife on our wedding anniversary, they are 34 years together. Grant it to me (laughs).”