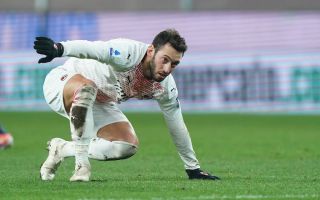 Pioli heaps praise on Calhanoglu and explains tactical choice: “He’s a leader on the pitch”

Although he hasn’t been able to live up to the post-lockdown form he displayed this summer, Hakan Calhanoglu has been an important player for Milan this season. With five goals and six assists (all comps), this is clear.

Last time out, against Genoa, he was one of the Rossoneri’s best players in what otherwise was a dull attacking display. Whenever they had a chance, Calhanoglu was involved one way or another, earning a high rating in our ratings.

Frankly, he has been very unlucky not to get at least one goal in the last few games. During today’s press conference, as cited by MilanNews, the Turkish international was praised by Stefano Pioli for his efforts on the pitch.

“Calhanoglu is a leader of this team. He’s a leader on the pitch, he’s an intelligent player. Lately, we have faced teams that have closed the spaces and therefore, sometimes, I have had to lower him even though I want to keep him high.

“He knows how to marry perfectly with the game of his teammates. I have great respect for him and with intelligent players, you can play great games. He has the qualities to have some more goals,” he stated.

The No.10 will play from the first minute tomorrow as well, hoping to score yet another high rating and help his team bounce back with a win. All the attackers need to step up, and Calhanoglu having a good day would help with this a lot.

READ MORE: Milan defender has asked to be sold as offer arrives from Serie A club