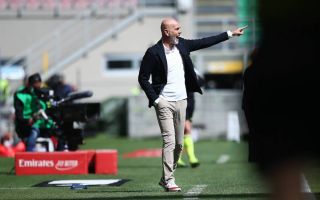 Stefano Pioli has insisted that he never mentioned the idea of AC Milan winning the Scudetto as he set a points target for his side.

For all their impressive work this season and having led the league for over 20 rounds, Milan have all of a sudden found themselves in an intense battle for the top four as the gap to fifth-placed Napoli now stands at just four points with nine games remaining in the league.

The Rossoneri’s struggles have been magnified in 2021 thus far as they have suffered damaging home defeats to Juventus, Atalanta, Inter and Napoli, while draws against Udinese and Sampdoria certainly did not help matters.

Pioli spoke to the reporters that gathered in the press room at Milanello about the game against Parma, and he insisted that he never talked about the title being a target. His comments were transcribed by MilanNews.

“We never talked about the Scudetto, you did. We are focused on the pitch. The words carry in the wind. If we are good at maintaining the average points held so far, we can close at 80 points,” he said.

“Each team has its own identity. The most important thing is to play football that adapts to the characteristics of the team. We try to play well to get to victory which is the main thing and everyone gets there as they see fit. I know that my players feel good about the way we play.”