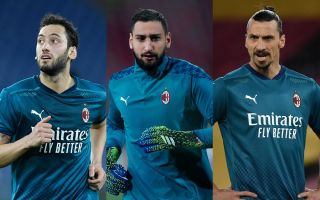 Milan have a few knots to untie ahead of the summer as the likes of Hakan Calhanoglu, Gigio Donnarumma and Zlatan Ibrahimovic are on expiring contracts. The former two, of course, are the priorities.

It seems the Rossoneri are getting closer to reaching an agreement with Calhanoglu, who wants to stay at the club and hasn’t made a crazy request. The negotiations have taken some time though, with a compromise finally in sight.

The same can’t be said for Donnarumma, as his agent Mino Raiola is asking for a ridiculous amount from the club and the parties are still far apart. It remains how that will end, therefore, while there shouldn’t be any problems with Ibrahimovic.

In today’s press conference at Milanello (via MilanNews), ahead of the clash against Sampdoria, Stefano Pioli was asked about the trio and how he views them on the training pitch in the midst of all this.

“I see the serenity in the eyes of Zlatan, Calha and Gigio. Their future is now, it would change a lot whether we qualify for Champions League or not, I see a lot of concentration and attention,” he stated.