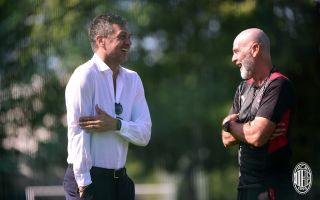 Pioli sends message ahead of January window: “If we can improve the squad we will”

AC Milan boss Stefano Pioli believes that the management will do what they can to strengthen the team in the January transfer window.

Calciomercato.com are among the sources to report that the Milan management are mainly focusing their efforts on looking for a central defender who will replace the injured Simon Kjaer who is out for the rest of the season after sustaining ligament damage in his knee, but they could also sign a forward.

Pioli spoke to the reporters who gathered in the press conference room at Milanello to preview tomorrow night’s match against Empoli and among other things he was asked about what he expects from the January window, with MilanNews relaying his comments.

“The level of the league is high, there are many teams that can have long winning streaks. We are one of these teams. We have to aim for 6, 7 or 10 wins in a row,” he said.

“We have to play our football, hoping that in 2022 all my players are healthy. As for the transfer market, the club has always done well in January. If we can improve the squad we will.”

READ MORE: Giroud or a false nine to be called upon as Ibrahimovic battles knee overload