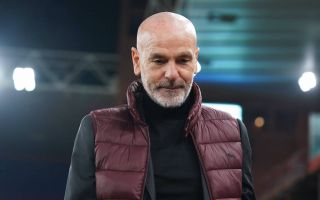 Pioli laughs off Guardiola comparison and admits: “The players continue to surprise me with my maturity”

AC Milan head coach Stefano Pioli has insisted that his team should celebrate a hard-fought three points against Sampdoria after a tough battle.

Pioli took charge of his 50th game as Milan boss at the Marassi on Sunday night and racked up his 30th win in the process as his side saw off the hosts 2-1.

It was far from a classic despite the fact there were three goals. Milan went in at the break a goal up as Franck Kessie converted a penalty after a handball, while Samu Castillejo scored within two minutes of coming off the bench to double the advantage from Ante Rebic’s assist.

Although Albin Ekdal did pull a goal back from a corner, the Rossoneri would prove to have enough. The result means that Milan are five clear at the top again and seven points above Sassuolo in fifth place.

Pioli was interviewed by Sky Italia after the game, with his comments transcribed by MilanNews.

“I told them that we are a real team. The best quality of this group is that it uses all situations, even the negative ones, to prove their worth,” he said.

“It is the first time we have played without Kjaer, Bennacer and Ibra. They are three very important players. I congratulated them, we want to win every match, we know it won’t be possible, but we must have enthusiasm to face every single match.”

On the celebration after Castillejo’s goal: “Luckily they run faster than me. I thought we had closed the game, I made a mistake. Unfortunately, the goal conceded made it difficult for us.

“We live to give our best every day, it’s right to celebrate and rejoice. These matches are the most difficult, we came from the Europa League, we only prepared for the match yesterday. We are a target for many teams, it is right to be satisfied and that the boys take compliments.”

On the group: “Today we had a very young team on the pitch, the players continue to surprise me with my maturity. Let’s try to live this moment well, it’s useless to think too much about the past or the future, we must try to insist on situations that can give us advantages.”

On the absence of Ibra: “We all know how much Zlatan has made us grow, we hope to have him on the pitch as soon as possible, same goes for Kjaer. The more of us the better.”

On goals conceded: “We have to be more careful on set pieces, we suffer a little because we don’t have much height.”

On the comparison with City and Guardiola: “I would have preferred to have some more hair (laughs). We try to put our opponents in difficulty and find as many solutions as possible. Each opponent poses different difficulties, we have to face them with quality.”

On opponents in the league: “The strong teams are coming, they are there. We are on an exceptional path. Inter, Juve and Napoli are the best equipped teams. Inter and Juventus can be considered the favorites, as well as Napoli. We don’t have to think about this, keep working like this and keep growing.”

On the January transfer market: “I have a continuous relationship with the club, there is sharing of everything. I am focused on coaching this team, we have ample room for improvement, my goal is to make these players grow.

“Then if the club can, it will intervene in January, it’s a particular market. We have important games, we are focused on this.”