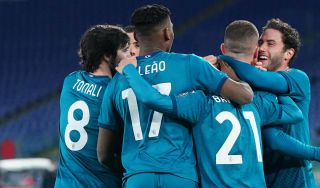 GdS: Pioli ready to rely on his three ‘little devils’ for derby clash against Inter

AC Milan head coach Stefano Pioli will rely on three of his young jewels as he looks to get a positive result tomorrow night against rivals Inter.

Of course the headline figures going into Sunday’s derby against Inter are the likes of Zlatan Ibrahimovic, Edin Dzeko and Simon Kjaer amongst others, but Milan will be hoping to continue the momentum they have in the league that has been built thanks to their exciting young core.

La Gazzetta dello Sport (via MilanNews) talks about the ‘little devils’ that the Rossoneri have at their disposal: namely Brahim Diaz, Sandro Tonali and Rafael Leao. Pioli will rely on the three of his prized young assets in the derby, as per the paper.

Brahim is charged after the call-up he got to the Spain squad, the same can be said for Tonali who was summoned by Italy and has the added motivation of being a Milan fan, while Leao is ready to show on the big stage that he has taken a huge leap.