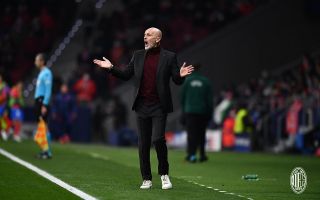 AC Milan head coach Stefano Pioli admitted it is ‘right to celebrate’ the team’s win over Atletico Madrid, one that keeps their Champions League hopes alive.

With just over three minutes left on the clock, it was Milan who got the only goal of the game at the Wanda Metropolitano. Theo Hernandez played a ball into Kessie who was playing as a makeshift attacking midfielder by the end, and he stood up an inch-perfect cross where Junior Messias was waiting to head in for his first Milan goal.

Pioli spoke to Amazon Prime Video after the game and admitted that he is happy to celebrate what was a fantastic win and a first in Europe this season, with his words relayed by MilanNews.

“It’s right to celebrate with my players, they made an important performance. They deservedly won, putting in quality and courage: they always have us believed and it is right to rejoice with them,” he said.

It marked yet another incredible chapter in Messias’ career. He joined on deadline day from Crotone and took some time to get up to speed, but then when he did get on the field for his debut against Atalanta he sustained a muscle problem that kept him out for a few more weeks. Now he is back to full fitness, and he made an incredible impact off the bench.

“It’s a beautiful story, but I think it’s only at the beginning. He has good qualities, then this goal will give him even more conviction. Messias will support the team.”

Seedorf was in the studio – a man knows exactly it takes to win in this competition as he is currently the only player to have won it with three clubs – and rather than asking a question he simply praised Pioli and his side.

“You know what it means to play for Milan. We are trying. I believe that the path is the right one and that today is an important test of maturity.”

There are an abundance of reports suggesting that Pioli will soon be rewarded for his fantastic work with a contract extension, but it is not yet a done deal.

“No, not yet. But we are in full harmony with the club, there is a general empathy among everyone that must continue like this. Then it’s the work, the quality, the ideas and the results that make the difference. Then the signing will come,” he said.