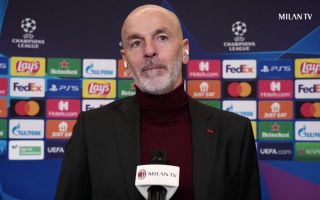 AC Milan head coach Stefano Pioli praised his side for the ‘personality’ they showed against Atletico Madrid and their ability to ‘almost completely dominate’ during their 1-0 win.

Milan went into the game knowing they needed to win at the home of the LaLiga champions in order to keep their slim hopes of making the knockout stages alive, and they managed to get a vital three points thanks to a goal with just over three minutes left on the clock from Junior Messias.

Pioli was interviewed by Milan TV at the end of the game and was asked about the celebration that the team had at full time as they went over to the travelling fans.

“I think the most important thing about the team is that we lived the game with an important mental intensity and it is right to rejoice,” he said (via MilanNews).

“We won a challenging match on a field where the Italians have not won since 1999. This victory with such opponents must make us understand that with the right ideas and the right attention we can be a strong team.

“It was the victory of Milan and the boys who showed personality. Tonight we managed to almost completely dominate the game, however the important thing is to try to play the game and be brave especially in the defensive phase. We tried it and the boys were rewarded with a great victory.”

On his hug with Maldini at the end: “We live our experience, our journey together with great passion. We are together every day, we know how hard we work to keep the club high. Today everything was wonderful, our fans made themselves heard. Let’s rejoice together and suffer together.

“I know the boys, I know how much they can give. To face this match with this attitude is a satisfaction for a coach who sees them continue to grow and who sees them strive to level up… It is a great satisfaction.”

On his own growth: “Pioli is growing with his players, we are confronted to try to field winning strategies. Mine is a ‘give in order to have’ approach, we are growing together.”

On whether Milan can get better: “Absolutely yes, I think we also have the technical and personality skills to better handle the pressure. But if you don’t move with the right timing and don’t give quick solutions to the bearer, you face difficulties. We have to work better.

“In certain situations we have been better, but against Porto and Liverpool we have had some difficulties. Tonight we reached an important level of performance and mental attitude, you could see that the team was there. But many steps can and must still be overcome. To win in Italy it is difficult and tough, in the Champions League there is an even higher level.”