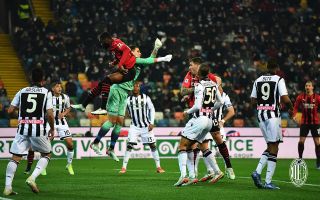 AC Milan were always going to find it hard to keep up their fantastic pace to start the season but with two wins in their last five league games, worries are beginning to emerge.

Tuttosport (via MilanNews) reports how Milan – for a team that has declared the Scudetto as its objective – cannot afford to drop many points and the game in Udine shows some important gaps on the part of Pioli, who used Bakayoko alongside Bennacer from the first minute again despite the fact it didn’t work against Sassuolo.

The team deserve to be questioned too because while Pioli chooses the line-up, he certainly does not ask them to make so many mistakes while in possession and for good chances to be squandered.

Pioli did not look for excuses after the draw with Udinese, remarking: “We struggled, we didn’t manage to have the clarity and precision in the choices that had to be used to undermine the opposing defense.”

The Rossoneri’s first shot on target was Ibrahimovic’s acrobatic equaliser in the 92nd minute, which is not good enough. Zlatan’s importance is key for all to see as even yesterday evening, in a bad and difficult match, he managed to haul his team out of a hole. Zlatan will certainly not be happy with the team’s performance though, and more must be done.