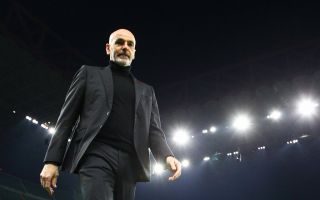 Milan responded to the loss against Juventus in the best way possible, beating the Bianconeri’s city rivals Torino this evening by two goals to nil. An important win for Stefano Pioli’s side, especially mentally.

The Rossoneri scored both of their goals in the first half and then defended for the rest of the game, focusing on counter-attacks instead. A wise tactic, seeing as Torino barely threatened even when they had time to build.

Rafael Leao got on the scoresheet first with a nice finished, assisted by Brahim Diaz after a lovely move. Franck Kessie then converted a penalty, which Diaz won. In an interview with DAZN, as cited by MilanNews, Pioli spoke about the performance.

On Leao: “He is an attacker, he can also play on the left but the important thing is that he continues to have intensity. He was inside the game, he must grow up but let’s not forget that he is a young boy.”

On the response: “I must say that I was not surprised, I was expecting this response. The team is young but strong. We played a very high-level first half, then in the second half, it was normal to manage and suffer a little. I am very satisfied with the performance of the boys.”

On injuries: “We still don’t know anything about Diaz and Tonali. I hope it is not a long time thing. I absolutely do not believe that Leao was a yellow card, never seen such a yellow card in the middle of the pitch.”

On Kessie: “Franck is becoming a player who does well in all phases, he gives us many things. It is continuous and clear growth, he is a strength of the team. It shows. He always has a very positive mentality, he is the first to help. On the pitch, these are very important behaviours, especially for a young team like ours that needs certainty.”

Who do you support tomorrow, Roma or Inter?

“Today we wanted to play well and win the game. We train in the morning and then enjoy the game. We like to see good matches, they are teams that play well with two quality players and two excellent coaches. This is not the time to look at the standings. In football, you just have to think about the next match. Now we’re back on the pitch on Tuesday.”

On Ibra: “We spent the week with a clear schedule, he accepted it. Had he passed the last audition yesterday he would have been available for a small piece. Now he has to find a good condition, we have to understand how to manage it. As always, he is very helpful and collaborative, we will find the best solution.”

Milan’s next game will take place on Tuesday, taking on Torino once again but this time in the Coppa Italia round of 16. A game that they should be able to win, based on tonight’s performance from Il Toro.