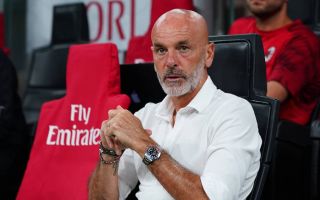 Pioli picks out ‘most important’ aspect of Atalanta draw; discusses future of Ibrahimovic and Leao

AC Milan boss Stefano Pioli praised his side’s efforts as they overcame the odds to earn a hard-fought draw against Atalanta on Friday night.

The Rossoneri took the lead in the first half thanks to an incredible curling free-kick from Hakan Calhanoglu that completely caught Gollini out in the Atalanta goal.

Gianluigi Donnarumma – wearing the captain’s armband – then provided some heroics as he saved a penalty from Ruslan Malinovskyi given for a stamp by Lucas Biglia.

Duvan Zapata did get the Bergamasca side back on level terms before the interval, but ultimately Milan would hang on to claim a precious point that many perhaps were not expecting.

Pioli was interviewed by Sky after the game, with the questions and his responses transcribed by MilanNews.

On team doctor Mazzoni’s red card: “We all have to fight and growl against a strong opponent. He is the most polite person in the world, a word will have escaped him, it can happen.”

On the current moment Milan are experiencing: “The team is doing well, we knew it was a difficult game but the great thing is that we tried to the end, this is the most important aspect.”

“We are Milan, we must grow and continue with what we are doing. We must finish the season well, let’s think about the next two games. We want to give continuity to what we are doing, then if we can improve it we will improve it”.

On Ibrahimovic: “Zlatan’s contribution to the ranking is clear, I hope to be able to work with him again, there are many things to put on the plate. He is a player who is well and can still be a driver, then he will depend on many other things.

“I believe that Zlatan and the club have not yet talked but it can happen soon. Before there was no certainty of who would have been the coach and certain situations had not yet been addressed.”

On the good points of the performance: “We all made an effort, the merit of the performances is everyone’s job. There were many young players who knew each other little, Ibra was good at making them grow. I am very happy with him.”

On Leao: “It is right to have high expectations because he has incredible potential, this year he will need it for next season, in training he does much better than he does in the game, but he will come good.

“He is a player who will have to explode next year, he has everything to become a player who makes us win the games. A 25-goal striker? Maybe, for me he remains an winger, or a second striker.”

What has changed after the post lockdown: “Awareness, confidence has changed, there has been no continuity and lack of victory against the great teams, this has given us confidence and courage.

“Now we have to finish this season well, there are two more games We played 5 games in 12 days, I can only congratulate my players.”