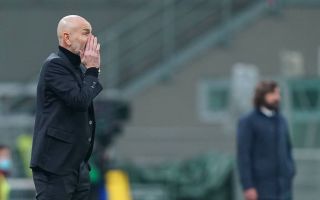 AC Milan boss Stefano Pioli praised his side for the spirit that they showed despite a 3-1 loss to Juventus at San Siro on Wednesday night.

The Rossoneri’s unbeaten run in Serie A was snapped at 27 games as Juve took advantage of the selection problems Pioli faced.

He was forced to make four changes to his starting XI from Sunday’s win over Benevento with Matteo Gabbia, Ismael Bennacer, Alexis Saelemaekers and Zlatan Ibrahimovic injured, Rade Krunic and Ante Rebic with Coronavirus and Sandro Tonali suspended.

Federico Chiesa’s finish after a feed from Paulo Dybala gave the away side the lead, but Davide Calabria drew Milan level with a sumptuous strike. Andrea Pirlo’s won the game with two second half goals, the first coming when Chiesa doubled his tally for the night before Weston McKennie finished the game.

The Rossoneri remain top of the Serie A table by a solitary point after Inter’s defeat at Sampdoria, while Juventus trim the gap to seven points with a game in hand.

Pioli spoke to Sky Italia after the game, with his comments transcribed by Football Italia.

“We have to tip our hats and give credit to our opponents for managing to get back in front. We did what we needed to, created chances and inevitably allowed some, but after going behind for the second time, it became more difficult to get back into it,” he said.

“We’ll evaluate a few defensive situations where we could’ve done better, but the team approached this game with generosity, determination and concentration.

“Their goalkeeper made a great save on Diogo Dalot when it was 1-1, then they went 2-1 up and it became an uphill struggle. Many teams would struggle missing that many players, but although we had to change things, we tried to maintain our identity and I think we did that.

“It was a very even game up until the second Juventus goal and I feel that’s the moment that changed it. The team could’ve been frightened by the situation, we found out last night that these two players couldn’t participate, but we held onto our values and identity.

“We knew Juventus could take advantage of the situation, as they’ve won the last nine Serie A titles, but we held out well overall. We were penalised by their quality in situations where we could’ve been a little more concentrated.”