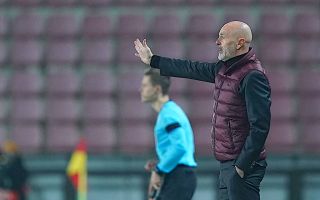 AC Milan boss Stefano Pioli believes the best is yet to come from Jens Petter Hauge as he praised two fringe players for stepping up to the plate.

Another fine individual effort from Hauge was the difference at the Generali Arena as he continued his red-hot recent form, making it three goals in his last four games.

The game got a bit feisty at certain points, though the evening was rounded off perfectly when news filtered through that Celtic had beaten Lille, meaning Milan snatched top spot in the group.

That means that the Rossoneri should in theory get a kinder draw in the Round of 32, but they also net an extra €500k from finishing top as opposed to second, making it a good night all round. Here are the teams they could draw.

Pioli was interviewed by Milan TV at the end of the game, with his comments relayed by MilanNews.

“It was important to interpret the match well, we wanted to win. I’m happy because the guys are ready. If we managed to suffer less and close the games it would be even better,” he said.

One man who was impressive throughout was Pierre Kalulu, deployed at centre-back in his first senior appearance in professional football, having joined from Lyon in the summer.

“In training when there were no central defenders we tried him there. He told me that he had already played as a centre-back in the youth sector. I am happy with their performance (Kalulu and Leo Duarte) and I am happy that they have taken away this satisfaction.”

On Hauge: “I’m sure we haven’t seen its full potential yet. He scored a beautiful goal, but in the performance I’m sure he can do even better. He has a lot of room for improvement.”

Finally, on Tatarusanu who made a couple of excellent saves: “He is a reliable goalkeeper, he has a delicate and difficult role.

“He is second to one of the strongest goalkeepers in the world, but he is a professional. We had to avoid that situation there but he was very ready, so that’s fine.”