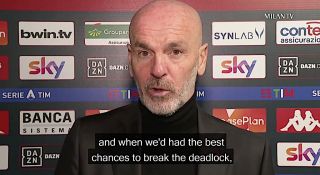 Pioli praises his side for their spirit, admits: “We can’t always go to a thousand miles per hour” – video

AC Milan boss Stefano Pioli has refused to accept fatigue as an excuse after his side limped to a draw against Genoa on Wednesday night.

It was a difficult evening at the Marassi as the home side twice led in the second half through former Milan striker Mattia Destro, but two equalisers arrived from Davide Calabria and Pierre Kalulu, the latter scoring his first goal for the club in the 82nd minute to snatch a draw.

It marks back-to-back 2-2 draws in Serie A in games that most fans were expecting six points from, and after the game Pioli spoke to Milan TV.

“I don’t think we were tired, but it’s clear that the games change mentally. We went behind, but we reacted and we got another positive result,” he said (via MilanNews).

“Our problem is not scoring, we have to go back to conceding fewer goals. We always want to win, when we don’t succeed it is normal to have regrets. I am satisfied with the performance of the boys, even if we made some mistakes.”

He also spoke to Sky Italia and praised his side for not giving up in the face of adversity.

“Milan never gives up, we can’t always go to a thousand miles per hour, it was a difficult match also thanks to Genoa and some difficulties on the ground,” he said (via MilanNews).

“In the first half we had some chance to break the deadlock, the performance was excellent, but there are some ideas to improve something. The only wrong approach was the one against Parma, not tonight.

“You can give your opponents some crosses, then it is clear that you don’t have to concede two goals. Genoa prepared well for the match and closed the flanks. We also had the chance to win it at the end, we didn’t succeed, let’s think about the next one.”

The absences of Ibrahimovic, Kjaer and Bennacer weighed heavily, and they were joined yesterday by Theo Hernandez, who remained on the bench at the Marassi due to a slight fatigue. Saelemaekers was missing from the starting XI and entered the field in the second half, but Pioli is still picking from a smaller group.

“It is enough to see the ranking and the results to understand that the quality of the performances was very high. The more quality players we have the better we do,” Pioli continued.

“We continue to score two goals per game, then we continue to grind in the games, obviously we hope to recover everyone as soon as possible. There are two games to go [before the break], now let’s think about these two games to end the year well. ”

On Ibrahimovic’s ambition: “I don’t want to be one of his sons (laughs). He talked about the Scudetto dream, it’s right that Milan are ambitious. The results are saying that we are competitive, but how can Juventus and Inter not be considered favurites.

“The more strong players we have, the more we can continue to follow this path. Nobody hoped for these results, I keep asking the team to put all the qualities they have on the pitch, we are proving to be a strong team.

“The team has certainties and values, it is a special moment because there are five players missing, it limits you a bit, especially in the changes. We have to hug each other, regain energy. I hope to recover some for Sunday, if not, those who play will give their best. They did it again tonight despite some struggles.”