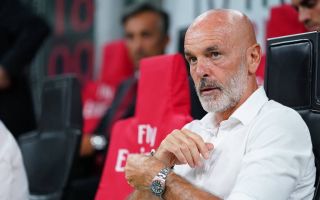 AC Milan boss Stefano Pioli heaped praise upon his side for a performance with ‘quality and intensity’ against Bologna.

Milan produced yet another dominant display on Saturday night as they swept Bologna aside at San Siro, winning 5-1.

The result moves Milan a point behind Roma in fifth and eight points ahead of Sassuolo as their charge towards a European spot continues.

Pioli was interviewed by Milan TV at the end of the game, and his words were transcribed by MilanNews.

On the number of goals, he stated: “We must congratulate the boys. They had an excellent game against a difficult opponent. We played with quality and intensity. Now there is another important game in three days, we must continue well. We have to hold on.

“The secret? It was the work we did together. We have always believed in our qualities and in our work, now we are reaping the benefits. I needed time to get to know my players, then things go by themselves afterwards.

“In January the team was strengthened and we are doing very well. Four games are still many and the ranking is still short, we will have to play with the same technical quality of today against a very strong opponent.

“Right now the choices are both easy and difficult, because all the players I am coaching deserve to play. We must keep the level of concentration high, everyone will be useful.

“We used common sense during the break, we tried to get the players off during the break for the first three weeks to leave them calm. We have worked well since October. Now we have to carry on because the next opponents will not be easy.”

Speaking to DAZN, he added: “The team is having fun, it is what shines through from training and from all the moments in which we are together.

“Today we played an excellent game, Bologna are a difficult opponent. We are fine and we have confidence, we must bring these characteristics until the end, four games are missing and we have not yet reached our goal.”

On Ibrahimovic: “I did not understand what he said, it is normal, I have to manage it, we play every three days and he had an injury. He is an important point of reference for the team, I need everyone to be well and I have to manage the conditions.”

On Kessie: “In my opinion, Franck is a modern midfielder who does both phases well, his psychophysical moment is excellent, I see great mental presence in him, he is becoming a reference point for his teammates, he is always in the game, he is selfless is doing important technical performances. It must continue like this.”

On the turning point: “The game that I think gave us the go was the elimination in the Italian Cup, having played the whole game with ten men and having been in it throughout, it was a painful evening but from that game we learned a lot.”