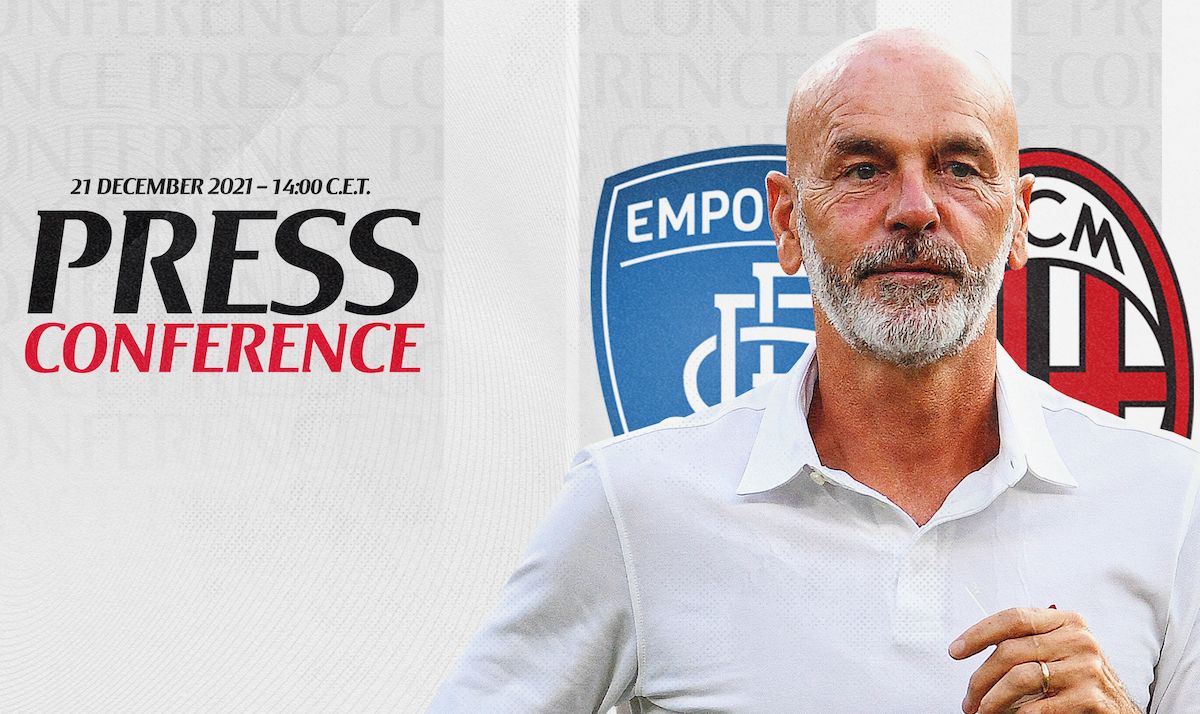 AC Milan head coach Stefano Pioli believes that his side are in the process of overcoming their injury problem, but also confirmed two key forwards will miss tomorrow’s game.

The defeat against Napoli was Milan’s third loss in their last six games and was a rather clear signal of a conspicuous decline in performances. They had a seven point advantage over Inter and are now four points behind their city rivals, proving that something has gone wrong for the Rossoneri while things have turned the right way for the Nerazzurri.

Pioli spoke to the reporters who gathered in the press conference room at Milanello to preview tomorrow night’s match against Empoli and among other things he was asked to sum up the current difficulties the team are going through, with MilanNews relaying his comments.

What moment are your Milan going through?

“I listen and read a lot of things, some of them are correct and can help us do better. I didn’t like the team in the performances against Liverpool and Udinese, while we had a good match with Napoli.”

What kind of a team are Empoli?

“They are a strong opponent, they have also beaten Juventus. It will take great determination against a team that plays good football and well trained by Andreazzoli. But we too have the cards to hurt Empoli, it will depend on us.”

How are you experiencing this phase of the season?

“When the results do not arrive, it is right to be less calm, but also more determined. We have to think about tomorrow’s game, we want to resume our journey immediately after a defeat at home. We wanted to obtain more points in the first half of the season than last year, it will not be possible, but tomorrow we want the three points.”

What didn’t you like about what you read these days?

“I read little, but some things are useful to improve. Against Napoli we played a good match. We make mistakes that are not allowing us to achieve results, it is clear that we need to do something more. We need more quality.”

Have Milan run out of fuel?

“When you win you run less than your opponents, when you lose you run more. What matters is the quality of the game, not how much you run.”

Even against Atletico Madrid you had many absent players, but you won…

“Against Atletico it was one of the best matches, we hit high levels of important quality. There were a lot of players missing there too. We are lacking a bit in the fluidity of the manoeuvre and in the last 30 metres.”

“Theo has become more complete, now he is also better in the defensive phase. He gives us a lot in the attacking phase. He is better, I hope he will be in optimal conditions tomorrow.”

What do you think about Kessie’s disallowed goal?

“The interpretation of the rule is not correct. The club are making themselves heard in the right places, it is useless to do it publicly. Kessie’s goal, in the dynamics of football, cannot be ruled out, Giroud cannot be offside.”

What is the cause of the many injuries?

“We have raised the level of prevention and recovery. The number of muscle injuries in November was too high and in the long run you can pay for it. We are overcoming the problem and will overcome it after the Christmas break. In the second half we will have to get more points. If we win tomorrow it will be 42 points in the first round, it would be a good return.”

How is Leao doing?

“Tomorrow he will not be there, he will return against Roma. Tomorrow there will be no Ibra due to an overload in the knee.”

What do you expect from the January market?

“The level of the championship is high, there are many teams that can have long winning streaks. We are one of these teams. We have to aim for 6, 7 or 10 wins in a row. We have to play our football, hoping that in 2022 all my players are healthy. As for the transfer market, the club has always done well in January. If we can improve the squad we will do it.”

How is Romagnoli doing?

“He’s a very useful player, he’s intelligent, he’s also fine physically. He’s an important player who can give us a great hand.”

What are you expecting from Empoli?

“I expect a mobile team. It is the only team that plays with a diamond-shaped midfield. We have prepared well. The Empoli players are well trained and do the right things.”

How do you see Kessie and Tonali?

Do you want Messias more in-field?

“Right now he is playing very wide in order to have the possibility to do have one on one situations. He is a player who – if he plays even more inside – can do well, it depends on the game.”