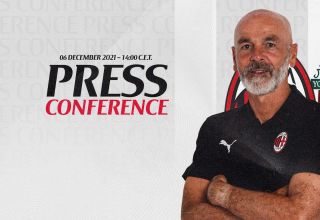 AC Milan head coach Stefano Pioli has called on his players to do everything they can to secure another memorable European night in the club’s history.

The win against Atletico Madrid on matchday five has left the second spot all to play for in Milan’s group, and while the path to qualification is relatively simple it will be one of those evenings where there is an eye on two difference games.

The Rossoneri know that they must first beat Liverpool at home tomorrow night and then wait for good news from Portugal where the match between Porto and Atletico Madrid will take place. If it is a draw or if Atletico win by the same margin (or a lesser margin) as the Rossoneri, then there will be wonderful scenes at San Siro.

Pioli spoke to the media who gathered for his pre-match press conference at Milanello, with his comments transcribed by MilanNews and translated below.

Does tomorrow’s match resemble that game in May against Atalanta?

“In terms of specific weight and mental preparation it is close. But we have also played other important games and I am convinced that we will play many more. We have prepared ourselves well, we have prepared everything down to the smallest detail.”

Leao is the latest injury, meaning Milan’s luck must be worse than bad…

“Milan must be strong because we will play against a team that can win the Champions League. We will have to be good at moving between the lines. From the first leg we have learned a lot, we know at what level we will have to play to compete with them. We are ready, they will be there. the fans push us, all the conditions are in place to do well.”

Milan are suffering from muscle injuries again, is there an explanation?

“We are working hard on it. The fact that we play a lot can be a reason. We are trying to do everything to try to preserve the players, to protect them, so I am doing even more rotations than last year. Now we have to grit our teeth, until December 22 we have to collect as much as we can, then I’m sure the situation will improve.”

What will you have to do tomorrow to put Liverpool in trouble?

“In the first game we suffered from their pressure, we even moved without the ball. They will press us intensely, but by now we know each other well, if we overcome their initial press we can create important opportunities.”

Krunic did well as a false nine. Is it a solution that will be useful?

“Yes, I think so. We must have many attacking players, indeed we must try not to give reference points. Krunic, Diaz, Messias have the ability to work between the lines and attack the space behind.”

What kind of awareness did participation in the Champions League give you?

Would dropping into Europa League be a problem?

“Last year Inter had a great second round and many thought it was because they no longer had European competitions. Maybe they would have done the same second round with it as well. Milan need to get back competitive in Italy and in Europe. If we were to go to the Europa League we would face it in the best way. But now what matters is tomorrow’s match: we want to face a team that is among the best in the world and understand where we have arrived.”

“Tomori is very strong, he has excellent characteristics for the way we play. He wasn’t there in Madrid and we won 1-0. This means that the most important thing is the quality of the team.”