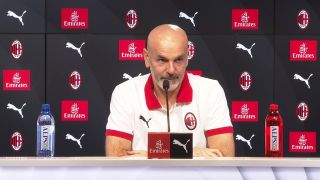 On the eve of the clash against Parma, Milan had the final training session at Milanello earlier today. Currently in first place with 26 points, they will be hoping to add yet another three points to their tally.

The Rossoneri are coming off a 1-0 win away at Sparta Praha, which helped them secure the win of their Europa League group. Even without key players such as Simon Kjaer and Zlatan Ibrahimovic, in other words, they keep winning the games.

Stefano Pioli spoke to the media at the usual press conference at Milanello today, as cited by MilanNews, touching on several topics. Parma have won just two games this season but will still be a tough opponent, the manager believes.

“Parma are a good team, they have characteristics that can put us in difficulty, we will have to be careful when we have the ball without forcing the plays.”

The league is a stage race, is staying undefeated in 2020 a goal?

“I’m a great cycling fan, four games are few, to win a stage race you have to think one game at a time. We are climbing a long and difficult peak, we have to think about tomorrow.”

How are Ibra and Kjaer?

“They are doing well with their injuries, their intention is to return as soon as possible, they are aiming for the match on Wednesday. I hope to get them back as soon as possible but we must not make any mistakes. They are fine, their training is going very well.”

Who is the striker between Rebic and Leao?

“They are both more wingers than strikers, Rebic is more suitable but Leao’s knowledge is growing.”

How does Milan’s way of playing change without Ibra?

“The way we play hasn’t changed that much, he’s a player who knows how to tie the game very well. Every single player has his own characteristics, Rafa has more freedom, Rebic is always good at attacking depth. For a striker, it’s important to score but for me, the work of the team counts more, as well as the movements and assists.”

Too much prudence when talking about the Scudetto…

“We are very strong and we are showing it. We must not change our attitude and that is to consider the next game the most important. We have to think one game at a time and try to pass a good Christmas for us and for our fans.”

Does Inter become the most dangerous opponent without Europe?

“I don’t know, it’s true that not having appointments in Europe allows you to work more, but then the difficulty of managing so many players can arise. We are happy with our path, we have achieved the first two goals. The week of the round of 32 will be very stimulating. We will have the derby between the two games.”

“He had a bit of a complicated summer, it’s true, but I’ve seen constant growth, I’ve always seen the desire to improve. I’m satisfied and he too, I know he can do even better but he will, together we can do a great job.”

You said Leao should smile more, what does that mean?

“He’s very intelligent but sometimes, he doesn’t convey all the desire that a young boy should have. He’s very willing and sometimes seems to hang around, he has to play like in the yard, always trying to score goals.”

After Thursday’s match, can we say that Milan are an orchestra and you are the director?

“I’m the one who has to give the game concepts, the changes I have made are natural. The games can be won or lost, but I was convinced of Thursday’s performance, those who train with determination then play like this.”

“Isma is fine, we gave him a week of normal training because he had the problem. He worked well, he recovered and is available.”

Kalulu did well as a centre-back…

“During training, due to various absentees, I tried him as a centre-back and he performed very well. He told me that he’s happy in that role. I liked it, it was a good performance, an even more important defensive wildcard, with the possibility of choice even greater.”

What do you think of the six Italian teams qualified for the final stages in Europe?

“It’s an important aspect for our football, we have to think about the top. The Italian teams are increasing in intensity as well as abroad, we have every chance to win again in Europe. I hope that some of us succeed, maybe we will.”

What is the strength of this Milan?

“The strength of our work is to analyze victories as defeats, we always look for all the aspects where we can improve, only in this way can we improve or at least consolidate this level. The responsibility and the desire and courage to continue growing.”

A word about Gabbia…

“He’s one of our very young players, he needs to grow but I’m satisfied with his performances. On the centre-right he can help us again in the construction, he’s proving he can be a starter in Milan.”

When was your strong bond with Milan born?

“The first day when I arrived, the club has always given me their best, they are making an important effort to keep us doing this job. We have everything to work at our best, Milanello is something unique, it makes you feel inside.”

What was the turning point in this growth process?

“Too many times we talk about the turning point, it’s the path that must give you the necessary knowledge. All the games, even those not done well, have allowed us to reach this level.”

The Rossoneri’s encounter with Parma is scheduled for 20:45 tomorrow and they are clear favourites to take home the three points. They will need to be concentrated from the first minute, though, as we know what can happen if not.

READ MORE – Ibrahimovic discusses his new role at Milan: “I’m not the same player I was 10 years ago”