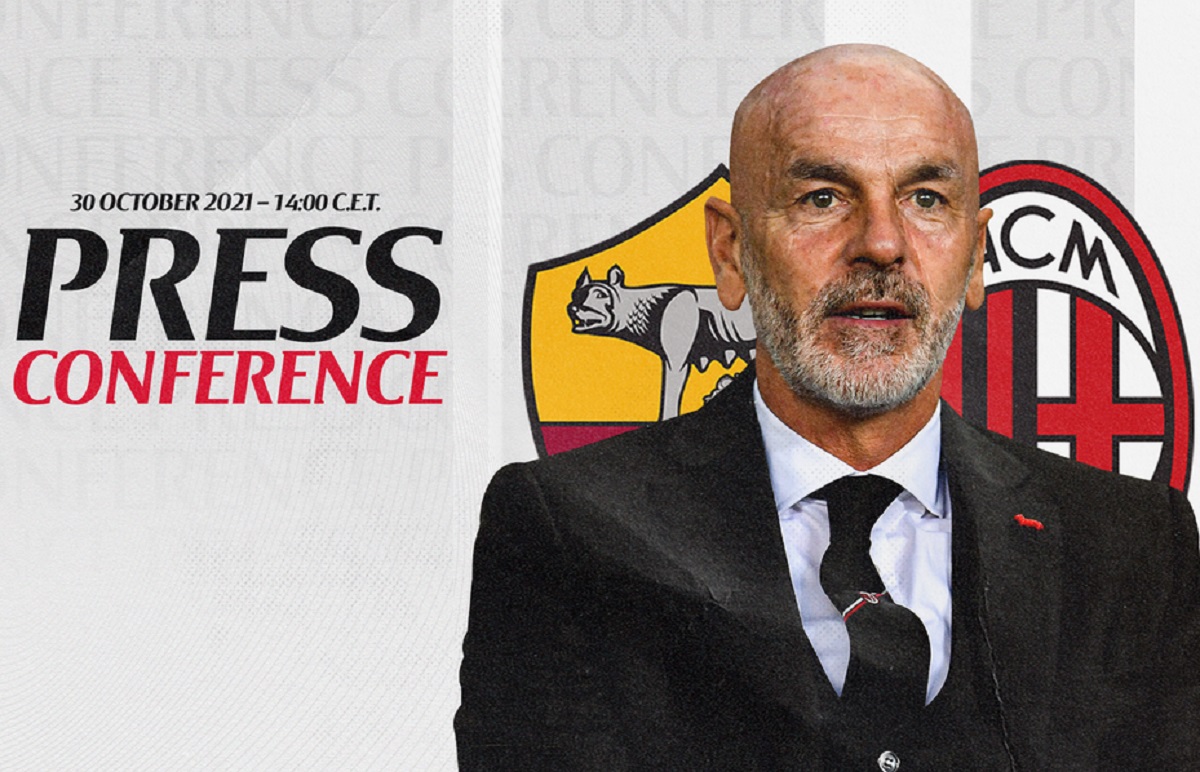 On the eve of the encounter between AC Milan and Roma at the Olimpico, Stefano Pioli spoke to the media at the usual press conference. Currently unbeaten in the league, the Rossoneri will be looking to keep it that way.

Pioli’s men have indeed started this season very well and only Napoli are ahead of them (on goal difference). Tomorrow’s clash will be an important one and there’s no doubt that fourth-placed Roma will put up a good fight.

Kick-off is scheduled for 20:45 and the likes of Theo Hernandez, Brahim Diaz and Zlatan Ibrahimovic will be back in the starting eleven for Milan. It’s a big boost to have these players available for what will be a tough game.

At the press conference, as transcribed by MilanNews, Pioli touched on several topics. He revealed that Ante Rebic is still struggling with his injury and won’t be available for tomorrow, among other things.

Will we find a stronger Roma after the Cagliari victory?

“No, I don’t think so. Roma are unbeaten at home, the only one who drew with Napoli; they have talent, quality and character: they are an important opponent.”

What does the match against Roma represent? How is Brahim?

“All matches are exams for us and we prepare ourselves to pass difficult exams. We believe we have prepared well but it will be a difficult match because Roma have a great attack. Brahim is better, he has done an almost complete week. Let’s see tomorrow.”

Will Ibrahimovic be back as a starter? Kjaer believes in the Scudetto and what about you?

“Both Ibrahimovic and Olivier are doing well. They are putting minutes in their legs and growing in condition. One will play from the beginning and the other will enter during the game. I agree with Kjaer’s words, we must put motivation and try to win them all.”

Are Milan learning to win even when playing badly?

“The opponents change and the difficulties change. With Torino, we dribbled less than usual but we were a team until the end. I don’t think we played badly but we must remember that there are opponents who prepare the matches well.”

What impressed you the most about Roma? What is Milan’s move to stop Roma?

“The most important aspect is that of character: against Napoli, they were aggressive, with great physicality and determination. We must also expect a kind of warm environment. We must be clean from a technical point of view and lucid in our choices.”

“The ankle pain has not gone away, he won’t be available tomorrow. We go day by day to understand when he will be available.”

What do you think of Leonardo’s statements about Kessie and Theo? What is the path of Milan and Napoli?

“I do not comment on Leonardo’s words. I want to see players available and interested in the team and we have learned to isolate ourselves from news. Napoli and Milan are making an exceptional path.”

Will there be some turnover, especially in midfield?

“There are four midfielders, Bakayoko is better and I hope he can start from the first minute soon. There is no essential player in Milan, Brahim is doing well but we have other characteristics to put on the pitch if he is absent.”

What match do you expect against Roma compared to the match against Torino?

“We expect a different match. The qualities of Roma are different from those of Torino, which were an intense team. We will have to interpret the match well on a technical level.”

Have you prepared anything to face Roma on set pieces?

“Dead balls are always very important, we know the qualities of our opponents and above all, Pellegrini and Veretout. We have prepared ourselves to counter them well. Training? I also keep length in mind when preparing for the match, so maybe I prefer a tall player.”

How important is the management of the dressing room this season?

“We are not interested in knowing what we have done before but it is important what we will do from tomorrow onwards. My job in management is not difficult because it is a very hungry team, eager to win something.”

How is Leao doing?

“Leao is fine. He accelerates, rips and consumes a lot. He must continue like this. He is showing great quality and great attitude.”

How is Theo Hernandez and what is the condition of Ballo-Tourè?

“These are delicate situations. I have seen Theo well and he will start tomorrow. Ballò has recovered but has only had one training session. He will be available. We will have to evaluate the conditions of the players well to always field a team that is up to par.”

An update on the injured? Messias and Florenzi?

“Florenzi and Messias are not available. They should return to the group in the next few days, I don’t know if they will be ready for Wednesday but probably for the derby.”

“Mourinho is a great coach and manager. He is very good tactically and mentally.”

Tomori will face his friend Abraham tomorrow, how did you see him this week?

“Tomori has important characteristics for our way of defending. He has an impressive continuity both in training and in the game and has a great mental attitude. I have seen him in good condition. When he has this mentality it is easy to be ready.”

Is preparing matches the most intriguing aspect for a manager?

“Preparing for matches is what I like best: we will try to find the right path for tomorrow’s match too.”