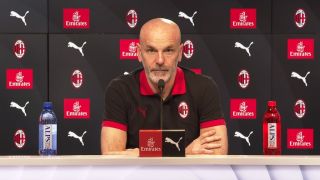 Pioli provides injury updates and reiterates mercato strategy: “If there are opportunities”

As the Christmas break has ended, Stefano Pioli once again appeared in the media room at Milanello to speak with the media. Milan will take on Benevento tomorrow evening and it’s yet another important game on their journey.

The Rossoneri are first in the league standings and have performed much better than anyone could have imagined before the season started. Pioli and his players just never give up and their form is proof of this, especially during the injury crisis.

After two consecutive wins, they will take on Benevento away from home and it’s an important game ahead of Wednesday’s encounter with Juventus. During his presser (via MilanNews), Pioli touched on the game, the absences and many other things.

Tomorrow comes Benevento-Milan, the Rossoneri have never beaten them…

“Beyond the numbers, we will find a team that is playing good football, is achieving important results and is well trained. We will have to approach the game well and play as Milan.”

What has changed since last year?

“A year ago we began to build, now the foundations are there, on those we must have the motivation to continue to grow, face every game to the fullest and try to win.”

“In my head, I have the micro goal, Benevento-Milan. We must continue on this team, 2020 was positive because all the components made the maximum potential available. We start again with great enthusiasm, confidence and conviction in our means, we must continue to grow and prepare well.”

How are the injured?

“The only one called up will be Castillejo, all the others are working well, they are not able to give the right timing, apart from Gabbia the others are muscle injuries. They are fine, they are concentrated, but today it is difficult to make predictions.”

How do you rate Sandro Tonali’s season?

“He is constantly growing, it is evident, he needed to understand how to move on the pitch. There are many things he can do even better, such as reading in the defensive phase, but also in the possession phase. He is a young and gifted boy, he has great room for improvement, he is attentive and serious, other improvements will come soon.”

What are the risks of a break?

“The stop was the same for everyone, I want fairness. We all finished together and let’s start together. The stop helped us, we had a busy month, but it was such a short stop that it cannot change the positive or negative. We prepared well.”

No need to reinforce the squad?

“The primary objective is to recover the injured, I have the right squad for all commitments. The transfer market starts from the 4th, the management will be ready if there are opportunities.”

Is the victory against Lazio the one that raised the most awareness?

“All the victories have given us confidence, Lazio are very strong, they put us in difficulty. Overcoming these obstacles means we have also grown from a mental point of view. Now they are waiting for us, they know us, but we are also waiting for our opponents and our potential in every game.”

How difficult is it tomorrow against Benevento?

“It’s a very difficult match, they play well, they have enthusiasm. Important teams have dropped points. It will certainly be a complicated match.

Ibrahimovic in Sanremo, can you give some clarifications?

“The reality is that Zlatan is much more focused on returning than to be in Sanremo, Ibra warned me and the club before it became news. He is so attentive and professional to take advantage of this opportunity to demonstrate how important and fundamental he is.”

“We remembered that match on the eve of the match against Lazio, because it was the same period. Now we just need to keep working, always being careful and prepared. In individual matches the limit between winning and losing them is very thin, only the one who is concentrated succeeds.”

A year has passed since Ibra’s arrival…

“It was a delicate moment, we came from the defeat in Bergamo, he was a godsend, he came with the energy that the team did not have at the time. Then Kjaer and Saelemaekers arrived, it was a market that allowed us to achieve something important.”

How much has Theo Hernandez grown?

“He played for Real Madrid, he has incredible potential, with his work he is improving day by day and proving to be a top player, he still has significant room for improvement, he must continue to work in this way.”

The game is scheduled for 18:00 CET and the team had their final training session this morning. As mentioned, the goal is obviously to grab the three points and thus preserve their spot at the top of the standings.