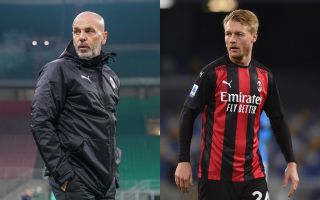 Pioli provides update on Kjaer’s condition in view of Lazio: “It’s only been 15 days”

Simon Kjaer is still struggling with an injury and will miss the game against Sassuolo tomorrow. As Matteo Gabbia is also injured, Milan will be forced to play with Pierre Kalulu alongside captain Alessio Romagnoli again.

The Rossoneri have drawn their last two games and will be looking to bounce back with a win tomorrow, even without their stars. In addition to Kjaer and Gabbia, the likes of Ismael Bennacer and Zlatan Ibrahimovic are also out.

Four starters, in other words, that Stefano Pioli will be without for the next couple of games at least. During today’s press conference, the manager was asked about Kjaer’s recovery and when he could make a return.

“It’s only been 15 days since his injury. Tomorrow he won’t be ready and it’s unlikely he will be ready against Lazio on Wednesday, but he’s fine and that’s the most important thing,” he stated.

As mentioned, Kalulu will play at the back once again after getting on the scoresheet last time out. However, he made a few defensive mistakes, which he must avoid tomorrow as Sassuolo are lethal up front.

READ MORE: Why Musacchio’s relationship with Pioli broke down – dates back to February