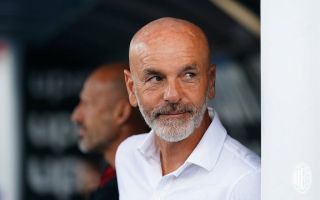 Pioli waives away Rangnick rumours with brilliant response: “I don’t care who we talk about”

AC Milan managed to claim an important win away at Lecce this evening, putting four goals past their former goalkeeper Gabriel. For Stefano Pioli, it was crucial to grab all three points amid the Ralf Rangnick rumours.

As we reported early last month, the German manager will lead the youth revolution at Milan, having reached an agreement with the club. However, it’s important for the Rossoneri to avoid distracting Pioli during what will be a crucial season finale.

In an interview with Sky Italia, as cited by MilanNews.it, the former Fiorentina boss was asked about Rangnick and his future with Milan. He didn’t give much thought to it, though providing a very good answer.

“I don’t care who we talk about, I’m fine with the team. I have worked with passion and competence from the beginning, it’s what we want to do until the end.

“The future will be decided at the end of the season. I’m focused on what we have to do, the schedule is difficult but we must continue to believe,” he stated.

On Sunday evening, the Rossoneri will take on Roma at the San Siro and considering the standings, they can’t afford to lose the game. There were positives to take from tonight’s clash but, as always, there are things they need to improve.