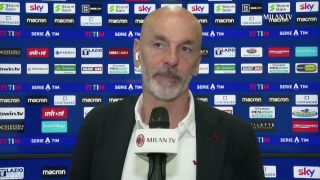 Pioli reflects on Lazio defeat and pledges: “We take our blame, we will do better” – video

AC Milan boss Stefano Pioli has pledged that his side ‘will do better’ after Monday night’s dismal 3-0 defeat against Lazio.

The Rossoneri came into the game looking to put the 2-1 loss against Sassuolo in midweek behind them, but found themselves a goal down after 77 seconds as Joaquin Correa rounded Donnarumma to score. Correa then doubled his tally after the break having had a goal ruled out before the interval, before Immobile finished the scoring in the final minutes.

Pioli was interviewed by Milan TV after the game, with his comments transcribed by MilanNews and translated below…

“We were playing against a very good opponent in counter-attacks and spaces, we had to be better at not sending the game in their direction. We have had opportunities but we still lack concreteness in the area,” he said.

“I expected more, we have to give more, but on the second goal there was a clamorous mistake. The foul was clear. Our season must not end here, but the episode determines the match and the final result.”

How will the team feel upon leaving?

“Having more determination, clarity and attention. We need to think about the next game and all the efforts made to be here. We can’t feel sorry for ourselves but understand our mistakes and try to do much better in many situations.”

Is the condition of certain players troubled?

“The higher the condition of the individual, the more the collective improves. We conceded the goal, however, after two minutes, we cannot think that it is the condition that does not make us clinical. We had to be more careful.

“It must not be an alibi but a concentration. In the first half we played for what are our characteristics but we are lacking presence and quality in the area. We also tried 2-0 but it became very difficult. I’m sorry, I’m the first to say that we have to do better but I’m sorry that the match ended on a second goal that wasn’t regular.”

On the standard of officiating in the league: “I was surprised because once he is called back to the VAR… I have reviewed the images, no one can say that Leiva takes the ball. It is a mistake that determined the game. We take our blame, we will do better. Let’s file this bad defeat, let’s think about the next one.”