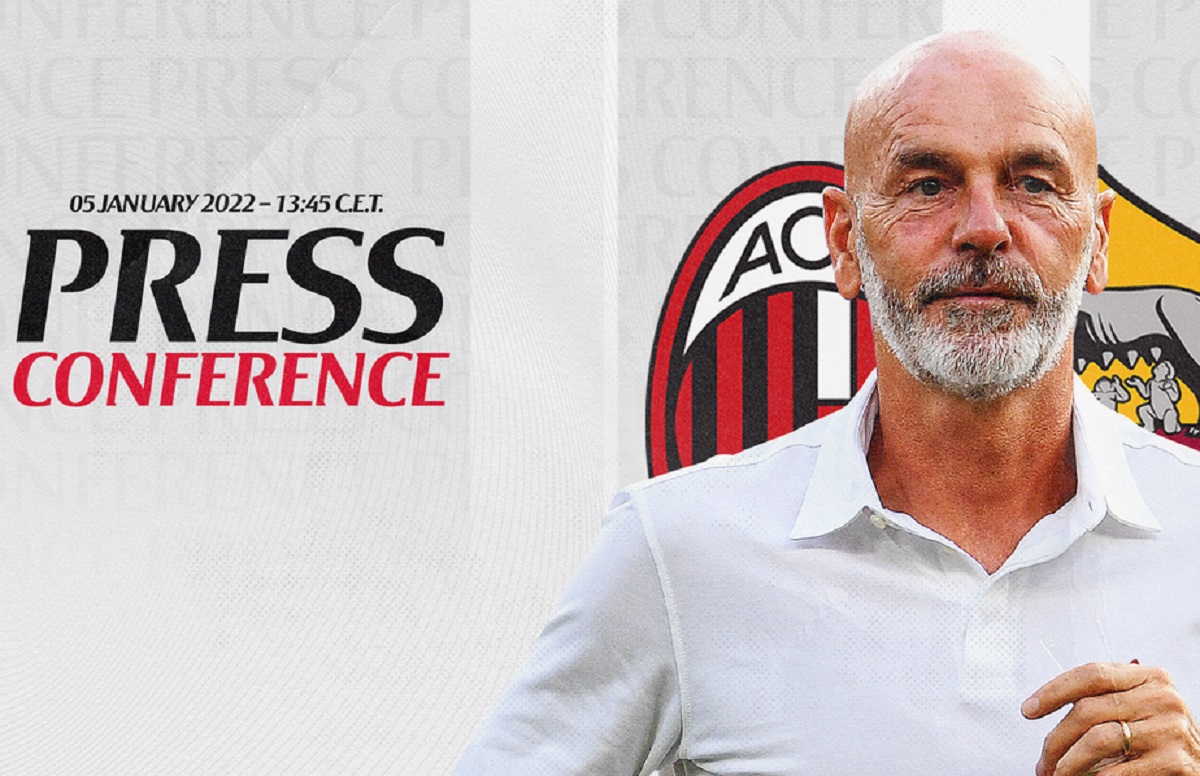 On the eve of the clash between AC Milan and Roma, Stefano Pioli spoke to the media at the usual press conference. He shared his thoughts on the current situation and the recent Covid-19 surge.

The Rossoneri will be looking to make it 2/2 against Roma as they beat them 2-1 at the Olimpico earlier this season. And after beating Empoli 4-2, they have restored some confidence that was lost during a tough end to the year.

At the usual press conference, as transcribed by MilanNews, Pioli shared his thoughts on several matters including the recent Covid surge and the Rossoneri’s intentions on the transfer market.

What do you expect in the coming weeks?

“We want to have everyone available, the break helped us in this. We needed to rest and also to work a little. We have recovered several players, who may not be 100%, but they will soon be.”

How do you train in this situation with Covid?

“It is not a normal situation, not only in football, but also for all citizens. The most important thing is health, we are respecting all the protocols. But unforeseen events can still occur, so everyone must be ready to play.”

Does the run-up to Inter start tomorrow?

“We want to win as many games as possible, we want to score more points than last year and we will need to make a return at very high speed.”

How are the recovered?

“None of those who come back tomorrow have 90 minutes in their legs. But they are guys who are better, they will also need to play to improve their condition.”

Do you expect an immediate response from your team?

“What they say outside Milanello is of little interest. I see a team that is willing, winning would be an extraordinary thing, but we have to show that we are strong in every match. We have created the pressure, we are ambitious. We need to score more points than others.”

What do you expect from the market? Can anything other than a defender serve?

“The ideas are clear and shared. Kjaer’s injury forces us to have an eye on defence. I have not made any other requests, I think the team is as complete as possible.”

“We are left with three midfielders, even if there are players like Calabria, Florenzi and Saelemaekers who can play in the middle of the pitch if necessary. I expect a lot from Bakayoko, he will have his chances.”

Who do you expect more from in this second round?

“I have great faith in my players, I expect a lot from everyone. We have an important project, we must continue to be protagonists and therefore we expect the best from everyone.”

Will we see more of Ibra and Giroud together?

“My choices will depend on their condition and on the individual matches. Giroud had a good start, then he had some problems, but now he is better and I expect a lot from him. The two strikers are a solution that we have already used, we will see from game to game.”

Is there a need to change something compared to the past?

“Many focus on our static initial positions, but we have an unpredictable system for our opponents. We often change positions. I find great participation in the team: we will continue like this. We are also ready to change something.”

“In the last few games, he suffered a bit, he lacked a bit of physical brilliance. The break did him good, I saw a brilliant and perky Brahim. He will be back as the decisive player at the beginning of the year.”

What kind of defender are you looking for?

“We want a complete defender, that is, he must be able to win a one-on-one, he must be courageous and then he must be a good playmaker, capable of making the right choices when he has the ball. It won’t be a roaring market for anyone, but I’m sure we’ll find the right player.”

What Roma are you expecting tomorrow?

“We had a great match in Rome. We will find a different team both technically and mentally, Mourinho did a great job. In the last away match of 2021 he won in Bergamo, he aims to return to the Champions League, so it will be an important match. Tomorrow is worth three heavy points.”

Can Ibra play from start?

“In the first half of the season, he had played one of his best matches. Ibra is ready to play, as is Giroud. We’ll see who will play from start.”

Could something change tactically tomorrow?

“It is possible to see different positions tomorrow. We are preparing to try to put the opponents in difficulty.”

What are your thoughts on the many Covid cases?

“All the teams try to respect the protocols. It is a delicate moment for everyone, no one expected so many cases. We must be responsible. Sorry to see fewer fans in the stadium, but to keep seeing them we have to respect the rules.”

What do you and do you not want to see from the Milan of the first half of the season?

“I want to see a team with energy and a team that knows how to carry out its ideas throughout the match, without being afraid of making mistakes. Strong teams always play the same way, also making mistakes, but always keep their style of play.”

How did you find the team after the break?

“They needed to rest and work and they did it.”

With Leao and Rebic being good at deep runs, will you have more space between the lines?

“Yes. If you are static, the defences close and leave you no space. With them, we can play even more between the lines.”

The game against Roma is scheduled for 18:30 CET tomorrow evening (Thursday) and it will be interesting to see Milan back in action. Hopefully, they will come away with all three points and send an important signal.

READ MORE: Giacinti’s loan from Milan Women to Roma hits roadblock due to one detail