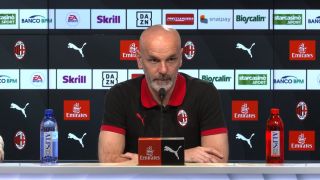 Pioli says Milan must ‘get used to pressure’ and reveals: “Bennacer had a bit of fever”

On the eve of Milan-Crotone, the Rossoneri had their final training session this morning and Stefano Pioli just spoke to the media at the usual press conference. Three important points at stake and the manager is confident.

Milan grabbed an important away win at Bologna in the last round and will be hoping to continue on this path, especially since the derby is in two rounds. With six points in the bag heading into that game, the confidence would be on top.

Fortunately, Stefano Pioli will be able to rely on most of his starters for tomorrow after what has been a tough few months in that aspect. During the press conference, as cited by MilanNews, the manager spoke about the game and the situation.

Yesterday Capello visited Milanello, the historical coaches are following this season with interest. Do you have this feeling?

“Sacchi and Capello are two great coaches, they have Milan in their hearts. They have achieved exceptional results here, they follow us with particular affection, they can only please us. I’m always very attentive to their evaluations and opinions, there is always something to learn. We hope to make them satisfied.”

“It was strange, it hadn’t happened to us for a very long time, we went to the depths of some situations from a tactical point of view. We did more targeted work from a physical point of view, it was a nice busy week, a useful week to prepare for the match tomorrow.”

You are now in the middle of the season…

“We are halfway up the climb, the most difficult slopes are yet to come, it will be difficult for all the teams. We cannot be satisfied, we have to try to raise our level, the important matches arrive, like tomorrow’s. We have to field more intensity.”

Is there an incentive to return to the top of the standings?

“The stimuli come from ourselves, we have won a difficult match in Bologna, we want to continue. We are not interested in the standings now, we want to try to win this match. It would be important to be first again tomorrow evening.”

Does it change anything to have Inter in front?

“We have to get used to the pressure, the difficulties will increase. I continue to believe that it’s a privilege to have this pressure, then it’s not the first time that we are behind Inter before playing. We are not focused on this, we are focused on playing well and approaching the game well, combining quality and intensity, in order to have a better chance of winning.”

At home, Milan have performed worse than away…

“It must be a stimulus to improve our home results. Improving away from home is difficult. Without the audience, there are not many advantages to play at home, but we have some regrets with Parma and Verona. In the other matches, we were not at 100% and we met very strong teams.”

How was Ibrahimovic’s week after the match in Bologna?

“I saw a very determined Ibra in Bologna, he was decisive. I liked everything he did on the pitch, as well as the whole attacking phase. We created ten scoring chances, it’s very difficult in our league.”

How did Calhanoglu come out of COVID?

“He had some symptoms, the situation takes something away from you in terms of condition, it’s good to have him back with us. He’s a very important player, then I’ll decide whether to field him from the start or as a sub.”

How did the preparation for Milan-Crotone go?

“We analysed match and training data, having a long week helped us. Those who were fatigued had the opportunity to catch their breath, those who needed to work more did it with the right attitudes. The week will be positive if we get the three points.”

Who are the toughest opponents in view of fourth place?

“My only concern is to keep the team’s level of concentration high. We can and must improve our technical/tactical level. All the top seven have the chance to win the Scudetto and reach the Champions League, they are all opponents to be feared a lot. The last 5/6 games of the season will be decisive.”

Could Tonali lose his spot with Bennacer’s return?

“As Zlatan says at these levels, ‘either you eat or you are eaten'”

What do you think of the opinions that come from the outside?

“We don’t care what they say from the outside, we want to get the best possible results.”

“He didn’t train because he had slight bronchitis and a bit of fever, he will be evaluated for tomorrow.”

Do you think this team has courage?

“We have never lacked courage, the more quality we can put on the field, the easier it is to win games.”

What opponent is Crotone?

“Crotone play good football, I don’t know which strikers Stroppa will field tomorrow. We will have to try to play the best possible match on a technical level.”

The game is scheduled for 15:00 CET tomorrow and we can only hope that the Rossoneri will get the job done. Certainly, it would be an upset if they can’t get the win tomorrow, considering the quality of the teams.