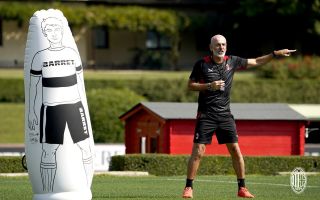 GdS: Players out of form and out of position – Pioli’s 4-2-3-1 has gone stale recently

AC Milan head coach Stefano Pioli might be thinking about some tweaks to his favourite formation as the team have become slow and predictable, a report claims.

This morning’s edition of La Gazzetta dello Sport (via MilanNews) writes that the 4-2-3-1 Pioli uses has been a success up until this point, but the last match against Napoli said everything. Without several key players the team lost speed and became quite predictable, and part of that is because of certain players occupying positions that are different to how the system should work.

With the absence of Theo Hernandez and Rafael Leao, the Rossoneri lost dynamism on the left side, with Krunic often appearing out of position. In addition, Brahim Diaz has completely lost his form since recovering from Covid and the No.10 role is one that Milan cannot do without.

Finding a potential solution to the problems in the final third is why Pioli is paid well to be a head coach, and with Leao and Rebic out against Empoli he may choose to make some tweaks.