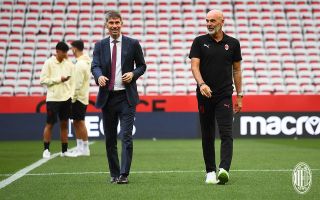 CM: Milan happy to extend Pioli’s deal for three reasons – the terms of his new contract

Stefano Pioli is very close to renewing his contract with AC Milan and everything should be made official soon, according to a report.

The latest from Calciomercato.com writes that the style of football he has imposed, the points he has amassed in the standings and the credibility he has given to the project are three of the major reasons that the management continue to give Pioli their full support. The ownership strongly appreciates the work he has done while directors Paolo Maldini and Ricky Massara are also increasingly satisfied with the choice they made and want to continue the journey with him.

Pioli’s deal expires at the end of the season but the renewal of his contract is proceeding quickly and in total calmness. In recent days there have been new contacts that have led to the principle of an agreement between the parties and the international break should serve as the perfect chance to iron every detail out.

The report mentions that it should be a two or three-year agreement with an almost doubled salary from the current €2m net per season to a figure close to €4m including bonuses. The last formalities such as Elliott Management’s green light are missing and when that arrives, Pioli will sign at Casa Milan.

READ MORE: Tomori discusses the ‘shock’ of being at Milan, marking Ibrahimovic and adapting to life in Italy