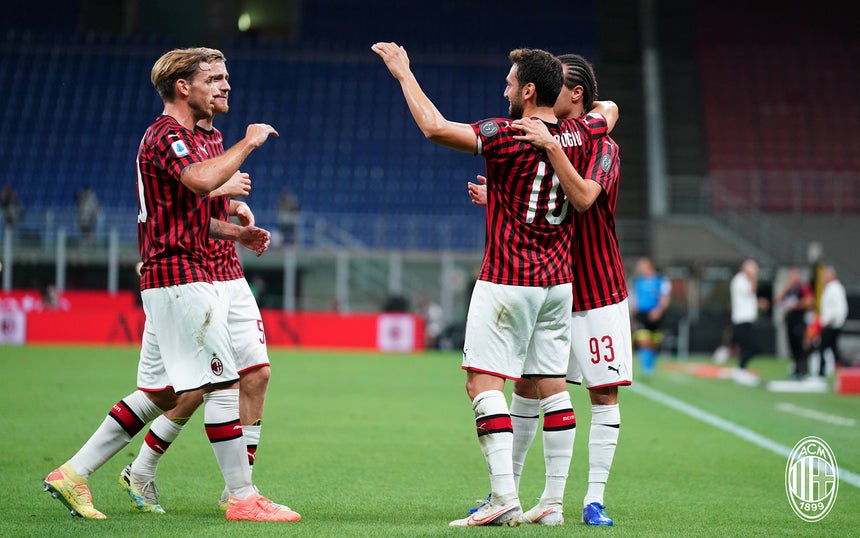 A depleted AC Milan kept their unbeaten streak alive with a draw against Atalanta at San Siro on Friday night.

Calhanoglu scored an incredible free-kick to open the scoring before Gianluigi Donnarumma saved a penalty, but Duvan Zapata equalised before half-time with a goal which would earn La Dea a point in the end.

Given the number of injuries and suspensions that Stefano Pioli was battling, it goes down as a point gained.

Donnarumma (6.5): The young goalkeeper was incredibly reliable as always, saving a crucial penalty in the first half and commanding his defence with confidence and charisma, with the captain’s armband too no less.

Calabria (6): A performance to build on for the Italian who looked quite decent in the defensive phase and was integral in keeping the Atalanta at bay with his relentless energy.

Kjaer (7) – MOTM: Another inspiring performance from the Danish international who was first to every ball and kept Duvan Zapata quiet throughout the game.

Gabbia (6): While not particularly great, the youngster did his part by covering for Kjaer and making a couple of great clearances.

Laxalt (6): The Uruguayan was quite poor offensively as he failed to bring any sort of threat on the left side. However, he contributed more at the back and it was far from the disaster some were predicting.

Kessie (6.5): A pretty good performance overall from the Ivorian as he seemed to take on all the defensive responsibility while contributing to moves going forward too. His recent resurgence has been remarkable.

Biglia (4): The Argentine looked out of shape, slow and completely out of the game. Unfortunately, he was more of a liability to his team mates than a worthy replacement to Bennacer.

Saelemaekers (5): Despite a couple of good runs, the Belgian lost too many balls, misplaced too many passes and failed to leave any sort of impact on the game. A performance to forget.

Calhanoglu (6.5): The playmaker continues to shine in his natural position, this time with an incredible free-kick. Though he was quite invisible in the second half, his first half brilliance is enough to praise his overall performance.

Rebic (6): A constant danger for the defence with great runs and bold dribbles, unfortunately for the Croat, the opposition were prepared to deal with his tricks. Overall, a decent display.

Ibrahimovic (6): Zlatan’s performance was carried by his intelligence and experience, he did not do much to cause trouble for La Dea’s rearguard but was crucial for the build up and surprisingly helpful in defence.

Leao (6.5): Amazing performance from the young striker, a true breath of fresh air in the second half that allowed his team to keep its momentum. He could have easily had two assists in other circumstances.

Bonaventura (6): Another great contribution from Jack, who is proving to still have something to bring to this team, even from the bench.

Krunic (6): He battles really hard but is quite a limited player technically. His shift was important though.