Yet again, Milan failed to claim the three points but at least managed to keep their unbeaten run going, drawing 2-2 against Genoa after coming back from behind twice. Down below are the player ratings.

Donnarumma (7): Couldn’t do much about the two goals Genoa scored and made several good saves to keep Milan in the game. His passing was good, too, so he shouldn’t be blamed for the result.

Calabria (7 – MOTM): Scored the first goal with a long-range effort and was constantly involved in the attack. Did well defensively, as well, and it’s clear that he’s the first-choice right-back for a reason.

Kalulu (6.5): If it hadn’t been for his goal, the rating would have inevitably been lower. He did okay at the back and won some duels but struggled when it mattered. Lost track of Destro on the second goal and perhaps could have done better on the first too.

Romagnoli (6.5): The captain put in a good shift today and tried to lead his team in the build-up. Got the assist for Kalulu’s goal and was needed defensively to keep Milan from conceding any more.

Dalot (6): Decent from the full-back, nothing more, as he really didn’t add much to the attack until the final 15 minutes. Did his duties at the back but you want to see more from him in other phases.

Tonali (6): The Italian worked hard in the middle but lost a few balls and struggled to get his passing going. It wasn’t bad, but in his role you expect to see him even more involved in the build-up phase. 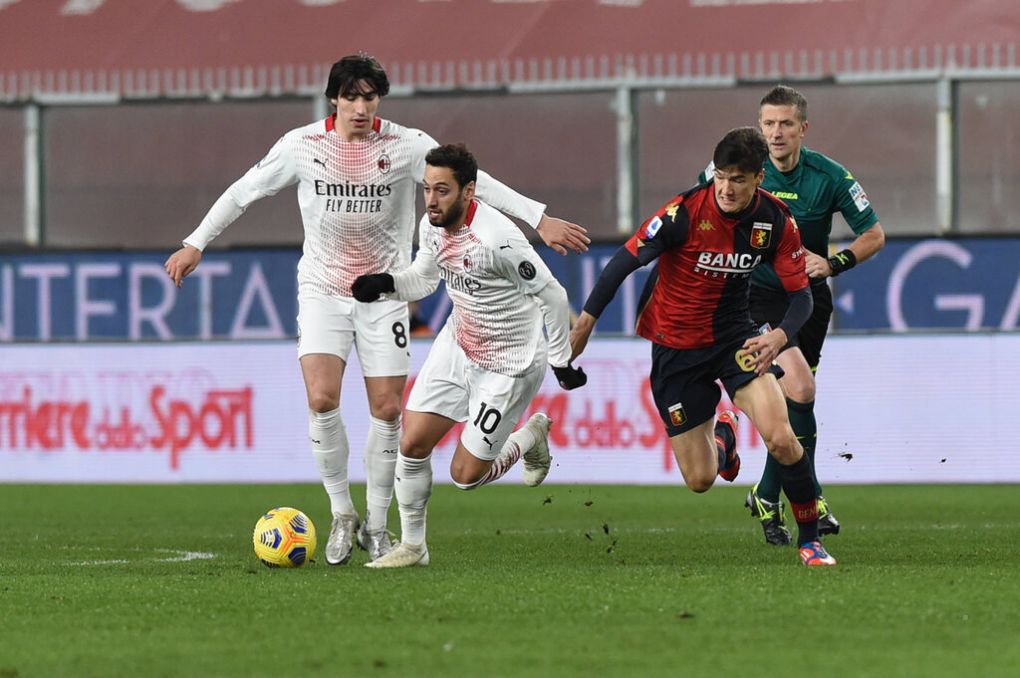 Kessie (7): In the first half, he did what was required of him and not much more, but he stepped up in the final 45. Was the only defensive midfielder left when Tonali left the pitch and he continued to regain possession.

Castillejo (5.5): He did see quite a lot of the ball but he didn’t do much with it. Was subbed off after 54 minutes (right after Calabria’s goal) and thus it’s hard to give him a higher rating.

Calhanoglu (7): When the other attackers didn’t do as well, the Turk was forced to step up and played an important role throughout the game. Got the assist for Calabria and sent in the corner for Kalulu’s goal. Decisive when it mattered.

Leao (5.5): Not the best of games for the Portuguese, who looked very sluggish for most of the game. A bit better when played as centre-forward, but in the end, he had little impact on the game.

Rebic (5.5): The Croatian is very out of form, it’s so painfully clear. Things just didn’t work for him today and bar a great solo run, which ended in a save by the goalkeeper, he didn’t even have any chances.

Hauge (6): Came on and tried his best to get Milan back into the game. Nearly scored with a trademark finished that just skimmed the post before going out for a corner.

Saelemaekers (6): Added good energy to the team and was able to keep the ball in the final third. Positive outing and he should perhaps start next game.

Diaz (N/A): Came on in the 77th minute and we didn’t really see much of him as Milan tried to secure first an equaliser and then the win.

Tags AC Milan Genoa Serie A
Related Articles
Messias starts against Inter as a midfielder – his encouraging record in the role
5 February 2023, 20:21
Official: Inter vs. AC Milan starting XIs – Leao dropped and Messias in midfield
5 February 2023, 19:51
CM: Zlatan to watch last derby of his career from the stands but his impact is still needed
5 February 2023, 19:01
Serie A Standings