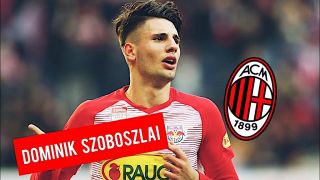 PM: Milan closing in on Szoboszlai – Rossoneri ‘one step away’ after decisive acceleration

AC Milan are finally closing in on the signing of Dominik Szoboszlai from Red Bull Salzburg, according to what one journalist is reporting.

The 19-year-old midfielder is believed to be one of the Rossoneri’s main goals for the summer, and will cost around €25m due to a release clause built into his contract, with the player keen on the move.

With the links continuing, Szoboszlai dropped another hint on Instagram about the possible move by liking a graphic regarding his potential transfer to Milan, and then his father did the same to really intensify the speculation.

According to what Pianeta Milan journalist Salvatore Cantone is reporting on Twitter, Milan are a step away from sealing the signing of Szoboszlai. The club have accelerated in the last hours in an effort that should bring the player to Italy.

Tuttosport (via MilanLive) reported earlier today that Milan have presented their first contract offer to Szoboszlai – a five-year deal worth €1.5million per year – and the chance to play an important role within the team straight away, something rivals Arsenal and PSG may not be able to do.