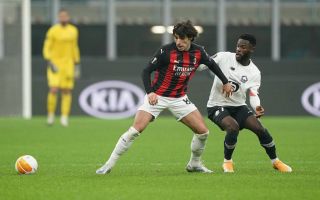 AC Milan head coach Stefano Pioli will have some selection dilemmas to resolve ahead of Thursday’s trip to face Lille.

Pioli will not be on the bench for the Europa League group stage match due to the fact he still has Coronavirus, and first team coach Daniele Bonera will instead take his spot just as he did for Sunday’s win over Napoli.

According to PianetaMilan, there are some doubts about how the Rossoneri should line up but rotation is expected. In defence Dalot should play in place of Calabria, while Kjaer could rest after a small muscle injury sustained at the San Paolo, but it is still more likely he starts.

Tonali will return to midfield, with Kessie and Bennacer battling for the other starting spot. In front of those two there are three almost obligatory choices given the injuries to Leao, Saelemaekers and Ibrahimovic.

For Lille, there will be no Renato Sanches which is a big relief for Milan, who really struggled to contain the Portuguese midfielder in the reverse fixture. That means there will likely be a chance for Boubakary Soumarè instead, linked with Milan during the summer window.

Yusuf Yazici – who scored a hat-trick at the San Siro earlier in the month – will keep his spot.