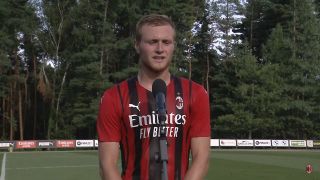 Milan kicked off their pre-season earlier this afternoon as they took on Serie C side Pro Sesto. As you would expect, it was a comfortable win for the Rossoneri as they found the back of the net six times.

In the first half, Stefano Pioli fielded a rather experienced squad with regards to playing with the first team, while there were some youngsters in the second. Tommaso Pobega was one of the players that came on for the final 45 minutes.

The midfielder, who spent last season on loan at Spezia, did very well in the midfield tandem and almost got on the scoresheet. His effort from outside the box struck the post and then rebounded off the goalkeeper and in, resulting in an own-goal.

In an interview with MilanTV after the game, as cited by MilanNews, Pobega spoke about the result of the game. He also revealed what Pioli has asked of them for the pre-season tour.

“Surely there is a bit of effort, but we are training well and today it went well. We are reacting well. As soon as you enter, you see that there is a good group. When you come back here, you feel the air of home.”

“He is asking us to return to full capacity. We stopped for a month, we have to start doing the things we did at the end of the season. And we must put them into practice.”

“Everyone who is here wants to do well and show off. Then the evaluations will be made by the coach and the club.”

CM: Milan to make important investment on a defender – the options from Botman to Serie A trio
6 December 2021, 12:09