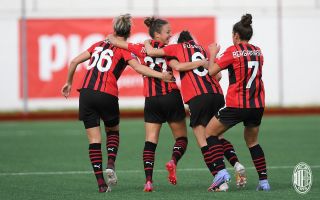 The AC Milan Women beat registered another win over the weekend as they beat Pomigliano by a score of 2-0.

In the end it was first half goals from Christy Grimshaw and Linda Tucceri Cimini that did the business for Ganz’s side as they moved onto 22 points for the season, five points behind the leaders Juventus. Here’s a recap of how they won the game…

The match against Pomigliano saw the return of Laura Giuliani to the starting lineup. It’s been a week full of surprises as Guðný Árnadóttir entered the starting XI. This was done to accommodate Agard, who dropped into the midfield. Laia Codina was also pulled from the starting lineup during the match, albeit due to a muscle injury.

Nina Stapelfeldt took her place. Valentina Giacinti also started the game. And she did so without the captain’s armband. The Rossonere got off to a flying start, as Giacinti hit the post at the five-minute mark.

Then, Giacinti unintentionally assisted Grimshaw from a corner and the Scotland midfielder held it down to slide the ball past Sara Cetinja. The hosts would not lie down quietly. In the 12th minute, Giusy Moraca hit the post from a free kick. Fortunately for Milan, the ball didn’t find the back of the net.

The Rossonere would double their advantage just three minutes later after Linda Tucceri Cimini’s wonderfully struck free-kick found the back of the net. Milan would go on to create a few more chances as they tried to extend their lead. Lindsey Thomas nearly scored in the 26th minute but her shot sailed over the bar. Valentina Giacinti had her chance in the 38th minute but failed to convert her chance.

The pace of the game slowed down after the halftime interval. Pomigliano did try to react, with shots by both Liucija Vaitukaitytė and Moraca. Neither of their attempts were converted. Milan then responded with chances of their own from Grimshaw and Árnadóttir.

The Rossonere held firm and maintained control of the match though the hosts did give the Rossonere a late scare. The previously mentioned Moraca had yet another shot on goal, as did Juventus loanee Dalila Ippólito. thankfully, Giuliani stopped both attempts.

Milan would answer back through, Jonušaitė whose shot at the 78th minute was off target. Giacinti then sent a through ball to Grimshaw but goalkeeper Cetinja came out to smother the attempt (85′).

Both teams had thirteen shots and five shots on target. Milan were more clinical and able to convert two of them.

Serie A Femminile will be suspended for the international break as the Women’s World Cup qualifiers will take place next week. Italy will take on Switzerland on the 26th and Romania on November 30th. After that, the Rossonere will meet Inter in the league for the Derby della Madonnina.