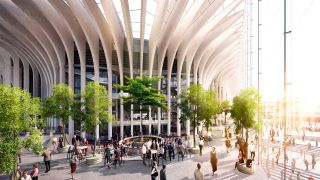 The CEO of Populous has stressed the importance of a new stadium for the two Milan clubs and revealed when it could be opened.

After initial scepticism, the general consensus among the main sources is that there is progress being made between Milan, Inter and the City Council over a new stadium after the Council were apprehensive at first about the potential demolition of San Siro, but things have stalled a bit given the elections coming up next month.

Lee spoke during an interview with La Gazzetta dello Sport about the project for the new stadium, with his comments relayed by MilanLive.

“I cannot go into details because we are in the running with another studio and I believe that no decision will be taken before the municipal elections in October. But we are very confident and believe in the innovation and sustainability qualities of our plan,” he said.

Lee was asked how Populous came up with the idea behind their stadium, which draws inspiration from the Duomo and the Galleria Vittorio Emanuele.

“We believe that a successful project must respect the tradition and soul of each place. This is even more true in Milan, Italy. So we thought of citing iconic places in the city, so that it was truly a ‘Milanese’ stadium.

“We wanted it to be immediately recognisable and to become attractive to those who live here as well. In our idea, the sports stadium is important, but it is part of a much more ambitious project. The new San Siro, in our ideas, will be a new district. It will be a place to go to all day for the whole week.”

Lee was asked to respond to those who still believe that renovating San Siro is the way to go rather than building a new structure entirely.

“I understand the point of view. The same thing happened in London for old Wembley. We all had a strong bond with that monument. But if you ask the fans what they think of Wembley now you will find that they are all overjoyed. And Milan and Inter fans will also be in Milan. Big football clubs need an innovative stadium. I believe it is a necessity.

“They can’t wait to start. It depends on when we begin. The construction of the stadium takes between 30 and 36 months. And counting all the completion works will take between 4 and 5 years. If the go-ahead is given by next spring it is possible to cross the finish line before the Olympics.”