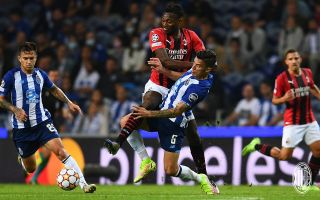 AC Milan’s Champions League campaign was almost certainly brought to an end as they were beaten 1-0 by Porto at the Estadio do Dragao.

An injury-hit Milan side never really got going in truth as the home side were better in every department and took advantage of Atletico Madrid’s home defeat to Liverpool, closing the gap between themselves and the Spaniards to one point.

The only goal of the game came from the man Stefano Pioli actually highlighted as the danger man in Luis Diaz as he slotted in during the second half, and the result means that the Rossoneri have played three and lost three in their return to the Champions League after a seven-year absence.

Pioli made four changes to the team that manufactured an excellent comeback against Hellas Verona on Saturday as Simon Kjaer, Ismael Bennacer, Rade Krunic and Rafael Leao came into the line-up.

Milan started the game on the front foot as their high press allowed them to win the ball back up the field and camp on the edge of the Porto box, but the home side were the ones who came inches away from taking an early lead.

In the fifth minute Luis Diaz was allowed space to shoot from the edge of the box after a counter-attack and the ball ricocheted off the inside of the post with Wendell dragging the resulting rebound wide.

Tatarusanu was called into action in the 14th minute as the home side began to turn the tide of the game and enjoy a good spell of pressure, but the Romanian easily gathered Pepe’s header from a threatening free-kick.

A neat interchange down the left side involving Leao and Giroud ended with a spectacular sliding block to deny a shot across goal, and up the other end Tomori was booked for a clumsy challenge to deny a counter.

Saelemaekers gave the ball away in the corner under pressure and Milan were given a let-off as Wendell curled his effort wide of the far post, and then Giroud should have opened his Champions League account for the season having been found unmarked at the far post but his header was totally misguided.

Not long after Kjaer had produced a fantastic block from Taremi, the Porto No.9 rose highest from a Sergio Oliveira free-kick to head wide of Tatarusanu’s left post.

Taremi was very close to giving Porto a lead just before the half-hour mark when he received a feed from Otavio and hit it on the outside of his boot towards the far post but it flashed inches wide.

The final chance of the first half for the home side fell to Otavio after a cut-back found him just outside the right edge of the box, but the winger – who was actually linked quite heavily with Milan at one point – sliced his effort up and over the bar.

Milan created their own opportunity from the ensuing goal kick as Saelemaekers whipped a delightful cross in that Giroud glanced towards the far corner put Costa gathered gratefully. Just before the break the Frenchman nearly found the net with an athletic bicycle kick though he was rightly whistled offside anyway.

Taremi must have been bemoaning his luck after the opportunities he missed in the first half and he was very close to giving Porto the lead with the first chance of the second half too as he got the better of Ballo-Toure and released a shot the was narrowly wide.

Tomori came to the rescue with a fantastic diving challenge as Otavio let go of a howitzer from about 20 yards out, with Ballo-Toure again having been caught ball watching. The home side continued to pepper the goal from distance as Uribe became the latest to let fly but the ball whistled wide.

A triple change came just before the hour from Pioli as he tried to change the flow of the game. Alessio Romagnoli, Pierre Kalulu and Zlatan Ibrahimovic came on in place of Tomori, Ballo-Toure and Giroud respectively.

Porto took the lead that their pressure had overall deserved in the 65th minute, and it came courtesy of the danger man Luis Diaz. A cross was not cleared well enough and was allowed to drop on the edge of the box where Bennacer was bundled over, and Diaz stepped up to curl a precise shot inside the far post.

A substitution followed not long after as Tonali came off in place of Tiemoue Bakayoko, with the Rossoneri now having it all to do in order to keep their Champions League hopes alive, and Pepe flashed a shot wide moments later.

A final roll of the dice came in the final ten minutes when Daniel Maldini came on, but the game filtered out to what ended up being a big anti-climax from a Milan point of view and a deserved first win of the group stages for Porto.