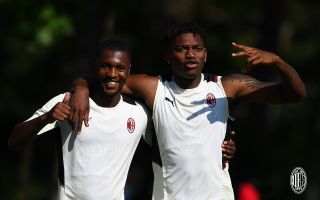 AC Milan and Wolves are in talks over the future of winger Rafael Leao, according to the latest from one Portuguese journalist.

In the absence of Zlatan Ibrahimovic due to injury and while waiting for Olivier Giroud and Ante Rebic to get back from their post-Euros holidays, it will be up to Leao to lead Milan’s attack in the first friendly matches of preseason.

He led the line in the first half of Milan’s 6-0 win over Pro Sesto in their preseason opener on Saturday, scoring the second goal with a nice finish, but still the rumours about his uncertain future at Milan refuse to go away.

According to Portuguese journalist Pedro Almeida, there are ‘open talks’ between Wolverhampton and Milan for Leao, but for now the 22-year-old Portuguese forward would prefer to stay at Milan. The former Sporting CP and Lille starlet is the chosen target for Wolves to replace Daniel Podence, while Marseille are also attentive.