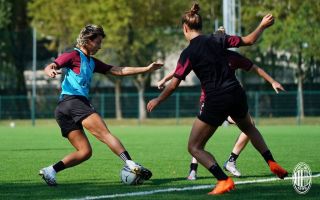 The AC Milan Women will return to action on Sunday when they face off against Pink Bari at the Centro Sportivo Vismara.

Milan won their last match against San Marino by a score of 5-0, and they’ll be looking to build upon that momentum and continue their good run of form into this game.

The Rossonere will most likely continue with the 4-3-1-2 formation. They’ll also field the same personnel, with the only exception being the possible return of Refiloe Jane in the place of Sara Tamborini.

Jane was pulled out of the starting line-up in the match against San Marino at the last minute. This was due to her coming down with an unspecified injury during warm-ups.

There has been no update to her condition since then, but if she’s recovered from her injury, then she’ll most likely be deployed against Bari on Saturday.

There are also reports that Julia Šimić could be on the bench for Milan. However, those reports are unconfirmed. Šimić is still recovering from a long term injury, however, and is in the process of being rehabilitated so that she can start playing again.

It would be wonderful if the midfielder could make her debut for Milan tomorrow. One shouldn’t get their hopes up too high though.

The Rossonere have won all of their matches thus far this season, while Bari has a mixed record with one win and one loss.

Look for Milan to try to make it three for three against the Apulians tomorrow.

You’ll be able to watch the game on TimVision and Milan TV (if you live in Italy) and on the official AC Milan app.