AC Milan travel to Germany this Sunday to have one last warm up fixture against SC Freiburg before beginning their domestic league run.

Milan enters this match up coming off an up and down performance within the Trofeo TIM cup. Montella has shown the consistency in play style needed for fans to know what to expect.

Possession, short pass, build from the back and confidence are all things Vincenzo has established in Milan. It is fair to say Milan have transformed into a different team than they were just 5 years ago, Montella is creating the mindset required to return.

Playing Freiburg is a unique test for the Rossoneri. A team whom historically shifts between the German first and second divisions, most recently won the second division and will take part in the Bundesliga as promotion champions.

On paper Freiburg have had a phenomenal preseason. Playing seven games, winning six and drawing one. The aggregate score of all these matches is an astounding 34-3 in their favor.

The good majority of these games have come against local sides or lower caliber leagues. Only one game came against a top flight team and they were still a bottom half team last season.

There should be no surprise as to the formation Montella will chose. 4-3-3 is his preferred choice.

During the Trofeo TIM Cup this formation was used and again we saw Bonaventura playing in the midfield. It should be clear that he will become a staple in our center; Niang Bacca and Suso are expected to be Milan’s attacking trident come Serie A’s start.

However this game will feature a different trio which will include Jack Bonaventura. 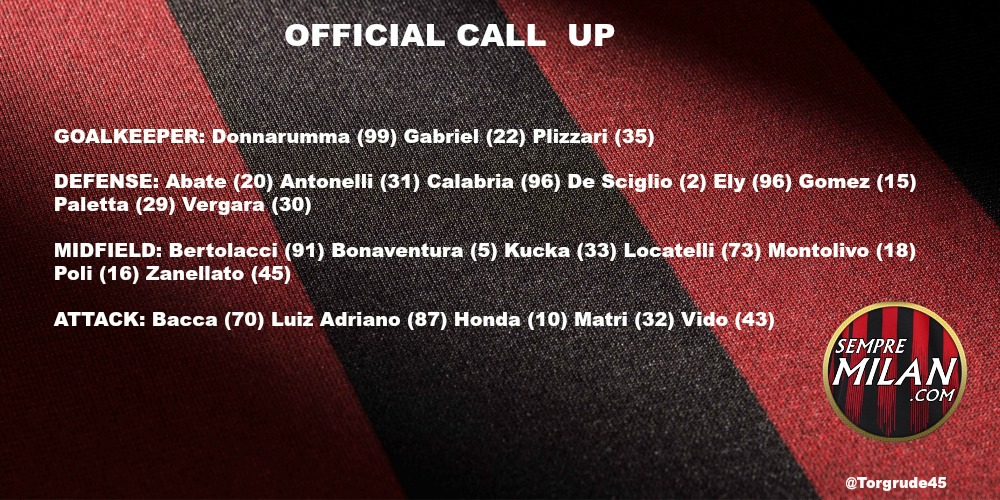 Some notable names are missing from the call up sheet for injury. Those are Niang, Suso, Lapadula, Romagnoli, Vangioni, Mauri. Also excluded was Diego Lopez who has been linked with a move away but this could be a simple coincidence.

The good news for Milan is Nils Petersen is competing in the Rio Olympics currently and will not be playing. Nils scored an incredible 21 goals last season. That is only nine less than AC Milan newcomer Gianluca Lapadula scored last season!

Expect to see a tenacious Freiburg looking to put on a show for their home crowd fans.

Gustavo Gomez is the player to keep an eye on. The debutante comes from the Argentine league where he was widely regardless as one of the best young center backs. Expect him to play for a few minutes.

Another young center back to watch on the Milan squad is Jherson Vergara. Unfortunately for him, my reasoning is not positive. Vergara is an anomaly of sorts, having positive spells on loan but has been at the root of most Milan errors this preseason. Give him a watch now because you most likely wont see him during the regular season.

Vincenzo Grifo is a young and promising midfielder with creativity for days and a knack for goal as well. Netting 14 times last season, expect the Italian to cause problems for the Rossoneri.