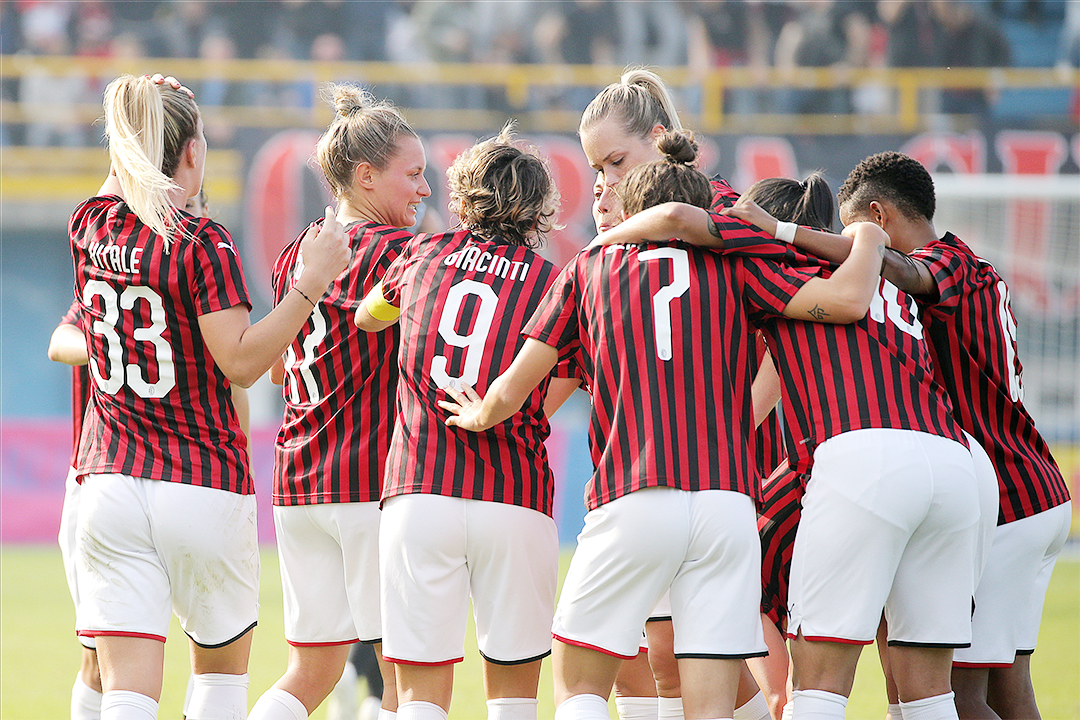 The Women of AC Milan will face their crosstown rivals Inter Milan again this Sunday, as both teams will contest the latest edition of the Derby della Madonnina.

Here’s an overview of what you need to know before the monumental match.

Where to Watch The Match

Sky Sport (if you live in Italy). You’ll also be able to watch it on TimVision afterward (again, Italy only). The game will most likely be reshown on the official AC Milan app and on the Dailymotion page as well.

This will be the fourth time the two sides have met and their third meeting in Serie A. Milan has won all three, previous editions of the derby, including their first encounter in 2018.

The first-ever edition of the derby in Serie A garnered quite a bit of attention. It not only trended in Italy but gained worldwide attention as well, as the official FIFA Women’s World Cup account even tweeted about it.

Lisa Alborghetti is the first player to have made the switch between the two sides in Serie A Femminile, as she went from wearing Rossonere to Nerazzurre late last summer.

Lisa also scored a goal in the last game against Milan as well. Let’s hope that the Milanisti behave themselves and don’t insult her again like they, unfortunately, did when she announced that she was leaving Milan for Inter. (Here’s to also hoping she doesn’t score against us again too.)

The last time the two sides met was in December of last year. Both teams were playing for a quarterfinal berth in the Coppa Italia, and Milan won that encounter 4-1.

Inter’s form since then has gotten a lot better. Though the Nerazzurre began life in Serie A rather tentatively, as they ended their first-ever game in the league with a 2-2 tie against Hellas Verona, they have improved since then. Inter has won both of their last games, including against the previously mentioned Verona. They are hitting their stride now and coming into prominence, and this is something that Milan should be wary of. Despite our great record against the team, we cannot underestimate them, for if we do so, we might end up paying for it dearly.

Gloria is a mobile forward whose speed, positioning and movement often create problems for the opposition. Even when she doesn’t have the ball, she still manages to cause problems for opposing defenses, as they have a hard time keeping her in check. She is also quite creative and creates a lot of assists for her teammates as well. Gloria is the complete package as a forward, and look for her to give the Milan backline fits as they try to contain her.

(However, Milan is fortunate enough to have quite a strong defense, with two of the best defenders in the country in Laura Fusetti, and Linda Tucceri Cimini. So far, they’ve kept Gloria quiet and have reduced Inter to scoring only one goal in their last two meetings. If things go according to plan, then expect them to do the same thing here.)

Beatrice Merlo, on the other hand, is a strong defender who possesses the deft combination of speed, strength and technical ability. She is the country’s second-best right back, after Fiorentina’s Alia Guagni. She’ll find a variety of ways to trouble Milan, as she both snuffs out our attacks and builds her team’s up as well. If there’s any player to watch out for this game, then she most certainly will be one of them.

Their most popular player, however, is Eleonora Goldoni. Eleonora gets a disproportionate amount of attention for – let’s be honest here – her ridiculous good looks. It would, however, be unfair to reduce Eleonora to her incredible good looks and to somehow view her as football’s equivalent of Anna Kournikova. Eleonora is a forward who possesses the lethal combination of physicality and athleticism that one develops by playing American ‘soccer’, with the technical ability one develops while playing in Italy. Once she finds her form, she’s going to become absolutely devastating. For now, however, her form is languishing as she’s still adjusting to life back in Italy and playing in the country’s top flight.

If she is deployed by Attilio Sorbi (Inter’s coach) this Sunday, then expect her to display flashes of this brilliance, even if she has yet to find her form.

The only bad thing about Eleonora is that she tends to overshadow her more talented teammates. However, this isn’t entirely her fault, as the media tends to focus on her to the detriment of the other squad members. That doesn’t mean, however, that this is a valid excuse not to pay attention to the previously mentioned Marinelli and Merlo.

Milan, however, has an edge over their opponents in two key areas: the strength of their defense, and with the maturity and experience of their players. Look for them to utilize both as they try to snuff out Inter’s young, but mobile attack, and to try to thwart all three of the players mentioned.

It would be wise to keep an eye out for all three of these players and how they’ll deal with Milan’s experience and maturity. (The latter two, however, are more worthy of your attention due to how talented the both of them are.) Expect Inter to give Milan a good challenge and to play a game worth watching.

Other Things of Note

Inter will also come into this game having had more rest, as Milan had to make-up their previously postponed game with Pink Bari last Wednesday. Physical fitness has, unfortunately, been an issue for Milan, so let’s see how well the team fares on Sunday.

Maurizio Ganz will most likely deploy a 4-3-2-1 formation. This will be the second game Ganz will deploy the formation, as he previously did so in the game against Pink Bari.

The formation differs from the standard 4-3-3 Milan usually fields. The implementation of this formation during the last game led to a decisive victory by Milan, as they won the game 6-3. However, they ended up conceding three goals as a result of this.

This was not only a result of this experiment but also due to playing a few players out of position, most notably with deploying Nora Heroum as a fullback. The hope is that, with all of the players returning to their normal positions and the return of a few starters (most notably starting centre-back Stine Hovland), that Milan will be able to score a lot of goals while remaining defensively sound at the back.

Ganz is also said to be debating who will start this Sunday’s derby in the midfield. The debate, in particular, centers on Nora Heroum and Claudia Mauri. Both players were fielded during the last game, with Nora as a fullback and Mauri in the midfield. We’ll know who wins this ‘dance-off’ between the two of them, come this Sunday.

Alessio Piazza will also most likely get the start over starting goalkeeper Mária Korenčiová, due to the latter missing the game due to a potential injury.

During an interview with Sky Sport, Inter’s coach, Attilio Sorbi, said that Milan were “one step ahead” of his team. During the very same interview, Maurizio Ganz said the games in Serie A were “never easy” and that the derbies are even more difficult.

He also said that obtaining a third derby win might be difficult, given how rare it is for lightning to strike twice (or in this case, three times).

Ganz also told his players that the season actually started ‘now’, in the second half of the season, due to how difficult the championship will become as they progress towards Champions League qualification.

Milan will face many challenges during this stage of the season, and this will be among the more sterner ones.

Here’s to hoping we can do what we’ve done so many times before and overcome these challenges, while proving everyone else wrong in the process.