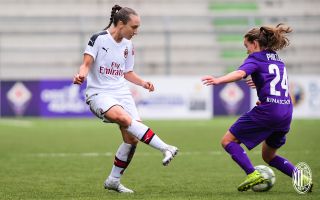 The AC Milan Women will take on Fiorentina in a quarterfinal clash for the rights to advance to the semifinals of the Coppa Italia. The match will be played this Saturday, at 2:30 p.m. CEST (5:30 a.m. PST / 8:30 am EST).

The winner of the match will advance to play against either AS Roma or San Marino Academy.

A brief overview of what you need to know before the match.

How We Got Here

Milan vanquished their crosstown rivals Inter Milan by a score of 4-1 in the Round of 16 of the Coppa Italia last December.

Beating your cousins at something is always great, but it’s even better when it gets worldwide attention.

Fiorentina are quite the formidable team. They not only have one of the strongest squads in Serie A, but they also have history on their side, as they were the first of the major Serie A teams to create a women’s football team. They’ve also been doing quite well for themselves this season. Despite initial losses to both Juventus and Roma, the Viola were able to bounce back and haven’t lost a single match since then.

The last time the two teams met in Serie A was in November. Milan had the misfortune of meeting Fiorentina after their Supercoppa loss to Juventus, and the game ended 1-1 after they relentlessly bullied us. Still raw after their defeat, they were angry and decided to take it out on us.

The two teams will meet again this Saturday under much different circumstances. Fiorentina has many weapons in their arsenal, but their three biggest threats are Alia Guagni, Tatiana Bonetti, and Ilaria Mauro.

Tatiana Bonetti is currently neck and neck with Juve’s Cristiana Girelli in the race for Serie A capocannoniere this season. She is a formidable forward, whose creativity, passion and intensity are mirrored by her temperament.

Ilaria Mauro is one of the country’s best forwards. Ilaria combines creativity, strength, along with a good heading ability. She has also made it no secret that she wants to be recalled to the national side, as she has been out of commission for Italy since last summer, due to a back injury. (She’s since fully recovered from the said injury though.) She’ll be looking to convince CT Milena Bertolini to summon her again through her performances, so don’t be surprised if she plays an absolute stormer against Milan, in order to get that phone call.

As for Alia Guagni, well, it’s hard not to write a paragraph about her and to not litter it with positive adjectives. If you were to create the composite of the perfect right-back, then the defender would most certainly come out looking like Alia. Alia is a strong, tall, gifted defender, whose combination of speed, strength, ability to read the game, and technical ability, is unrivalled.

She is by far Fiorentina’s best player and was even declared the best player in Italy for two years in a row.

Also, recall that Alia actually scored against the Rossonere the last time we played against each other.

Expect her to marshal the backline and rally the troops but most of all, expect her and the rest of the Viola to give us a really hard time.

Milan will most likely field a 4-3-2-1 again. The formation has been successful so far, as Milan deployed the formation to great effect in their game against Pink Bari.

While Milan won the game by six goals, it is also worth mentioning that they took three goals in return. This was due to a variety of factors, mainly due to a few players being played out of position, as Maurizio Ganz was experimenting with the line-up.

Since then, Ganz has returned the players to their original positions. While the left-back position is usually the sole domain of Linda Tucceri Cimini, the right-back position for Milan has been less stable this season, due to Federica Rizza being injured. As a result of this, there’s been a rotation in that role between Valentina Bergamaschi and Francesca Vitale.

There’s little chance of Francesca being deployed in that position for this game, however, due to the fact that starting centre-back Laura Fusetti will be suspended for this match after she acquired a red card in the game against Inter. Instead, Francesca will most likely be deployed as a centre-back.

It was the position she initially played in before she was converted to the role of right-back. We’ve only seen her play as a centre-back twice this season, and she stepped up to the occasion in both matches.

She was brilliant in the game against Orobica and a true force at the back against Bari (the three goals conceded aside).

She’ll need to step it up in a big way again here if Milan are to advance to the semifinals.

Deborah Salvatori Rinaldi is also tipped for a potential starting-berth. After being sidelined for nearly six weeks, Deborah is finally fit and ready to play, evident by her substitution into the last game against Inter. It should also be noted that Deborah is a former Fiorentina player, as she played for them for two seasons, before making the switch to crosstown rivals Florentia in 2018.

That should make her potential start against her former team quite interesting (if not a potentially acrid affair). That is, of course, assuming that Ganz chooses to start her and not Pamela Begič, as he is said to be debating over which one of them should start this Saturday.

Ganz will also start Miriam Longo in place of Berglind Björg Thorvaldsdottir. Thorvaldsdottir has, unfortunately, been struck with a fever (as has Nora Heroum). As a result of this, the two of them will not play this match. The hope is also that by starting Miriam in her place, that Milan will be able to replicate the success they had against Inter in the competition, chiefly when Longo scored less than 19 seconds into the match.

Whether or not this will be successful will be known this weekend.

Throw It In Reverse

The FIGC allowed the venues for the fixture to be reversed. Prior to this, it was Fiorentina who would host the first game while Milan would see out the final game of the tie at home.

However, the FIGC rules state that the team with the best head-to-head record will be allowed to make this change in their favour.

Meaning? Fiorentina will get to play the final game at home, thus giving them a slight advantage in the fixture. To say this does not benefit Milan in any way is stating the obvious.

Expect Milan to play their usual game, which is utilizing their dynamism in attack and combining it with their strength at the back.

The 4-3-2-1, however, lacks the natural width that Milan are used to playing with, so expect them to play more narrowly and centrally.

The utilization of this formation, however, could be advantageous to Milan, as the formation allows for defensive solidity in the middle of the park, while also allowing for slight changes in the positioning of the attacking midfielders. That can give the team good coverage in wide areas if need be. The formation is also great for counter-pressing, as the narrowness of it creates small distances between the players. All of this will be vital as Milan seek to snuff out Fiorentina’s attack while trying to build up their own in return.

A potential hindrance to all of this, however, is the question of chemistry, particularly at the back. This will be the first time that Francesca Vitale and Stine Hovland will play together as centre-backs. Although Francesca is used to this type of scenario due to the positions she’s been fielded in this season, the real test will be to see how Stine handles this potential change in the line-up.

Only adding to this will be Nora Heroum’s absence, as the lack of her strong and stable presence in the midfield will surely be felt.

Keep in mind that this will only be Milan’s fourth game utilizing this formation, so it will be interesting to monitor their progress as they continue to adjust to this, in addition to the improvisations at the back.

Fiorentina will also have the benefit of having a full-strength squad, while Milan will be dealing with many key absences. There are no excuses however, as Milan will have to rise to the occasion and meet whatever challenges come their way head-on.

Fiorentina are a tough team, but here’s to hoping that Milan will be even tougher.