Preview: Serie A Round 1 – Udinese vs. AC Milan

The wait is finally over. AC Milan will kick off their 2019-20 campaign with a trip to the Stadio Friuli on Sunday night to face Udinese.

The Rossoneri will be looking to go one better than last season and crack the top four for the first time since 2013-14, having painfully missed out on a Champions League place in the final game of last season.

Indeed a return to the Europe’s elite club competition is high on the agenda for Marco Giampaolo, who heads a new-look Milan off the field along with Paolo Maldini, Boban and Ricky Massara.

There are some fresh faces on the field too: Theo Hernandez, Rade Krunic, Rafael Leao, Ismael Bennacer and Leo Duarte have all arrived in the current window for a combined €90m.

The time for talk, preseason games and mercato rumours is over and it is time for competitive action once again.

As mentioned, Giampaolo will have five new players available at his disposal this season, however at least three of them are expected to miss out against Udinese.

Hernandez is recovering from an ankle injury sustained in preseason so Ricardo Rodriguez will be in his place, while Krunic and Duarte are not anticipated to be part of the starting XI in the early stages.

Bennacer has not had long to work with the group following his AFCON campaign, meaning Biglia was expected be preferred to him, but the Argentine’s late injury means that Calhanoglu is set to be used as the regista.

Meanwhile Leao may also miss out as Samu Castillejo has also had more time to prepare.

Mattia Caldara will of course sit the game out as he continues his recovery from ligament damage, with a return expected in the next two months, but Giacomo Bonaventura could feature in competitive action for the first time in over 300 days.

Meanwhile, reports have suggested that Fabio Borini will start over Franck Kessie for the same reasons as Biglia, with Suso expected to play as the trequartista.

This season represents Udinese’s 25th consecutive campaign in the top flight of Italian football, and under Igor Tudor they will be looking to build on the previous season.

The Bianconeri finished 12th in Serie A with 43 points, but were never fully out of the relegation battle until the last few games of the season as in the end they finished just five points above the drop. 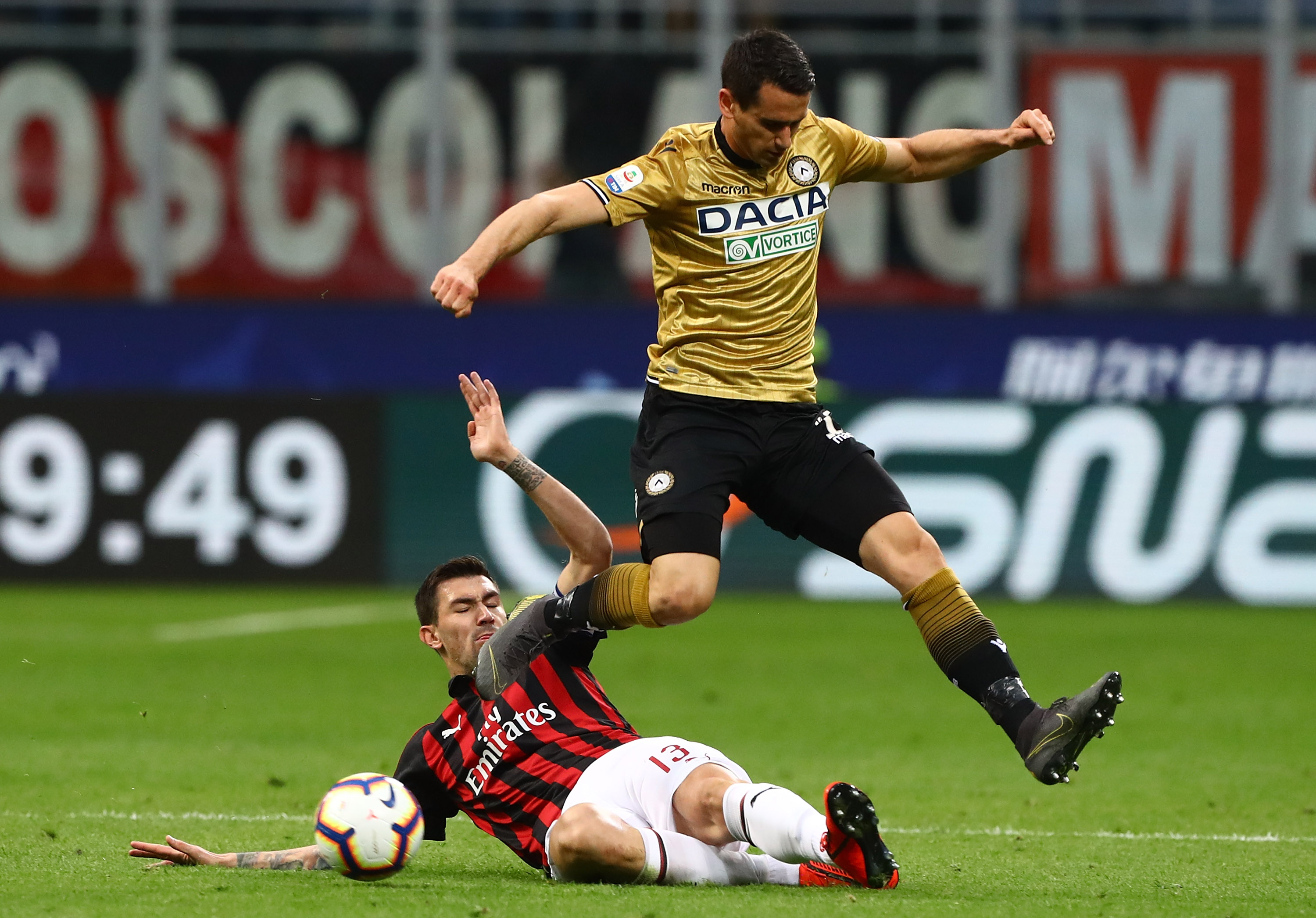 Udinese have brought in eight signings this summer so far and have paid money for four: namely midfielder Walace from Hannover, defender Becao from Bahia, forward Cristo from RM Castilla and another defender in De Maio from Bologna.

Nestorovski and Jajalo both arrived on free transfers from Palermo, while Nicolas came from Hellas Verona and winger Ken Sema joined on loan from Watford.

Tudor prefers a 3-5-2 system and two familiar names could start up front in Kevin Lasagna – who has two goals in four games for Udinese against Milan – and Rodrigo De Paul, who was linked with a move to the Rossoneri.

Milan had mixed fortunes last season against the Friulians, but the games were far from short of drama.

In the corresponding fixture last November, captain Alessio Romagnoli was the hero as he popped up with a winner in the seventh minute of added time.

The goal was confirmed after a lengthy VAR review and gave Milanisti one of the best moments of the season (and also our podcast intro).

In the return game at San Siro, Milan looked to be on course for all three points when Krzysztof Piatek netted the opener just before half-time.

However, Lasagna popped up to demonstrate he has many layers to his game, capping off a counter-attack from a corner by fire home Seko Fofana’s feed.

Of the last 30 league meetings between the two sides Milan have had the advantage, winning exactly half of the meetings. Udinese have won eight, and there have been seven draws.

The Stadio Friuli has not been a happy hunting ground for the Diavolo though, as they have won just two of their last seven games in Udine, losing four.

In addition, Milan last kept a clean sheet away at Udinese in May 2011, in a 0-0 stalemate.

After struggling to find the back of the net in preseason, all eyes will be on Milan’s new No.9 Piatek.

The Poland international looked lethargic in the friendly games, but on his day he can be a match-winner in a scrappy early-season encounter as this one is expected to be.

It will also be interesting to see how Suso performs in his new trequartista role, plus Musacchio’s performance alongside Romagnoli will also be scrutinised.

For the home side, Lasagna will have to be kept quiet as will their star man Rodrigo De Paul.

Mandragora has also demonstrated his ability to run the midfield well, so it will be an interesting battle against Milan’s patchwork middle three.

Games so early in the season are very hard to call, and although Giampaolo’s side should be looking to return to Milano with all three points, it is not going to be straightforward.

A combination of the poor track record in Udine and the fact so many key players are either missing or not yet fit means this could be a very gritty encounter, and one where three points is by no means a given.