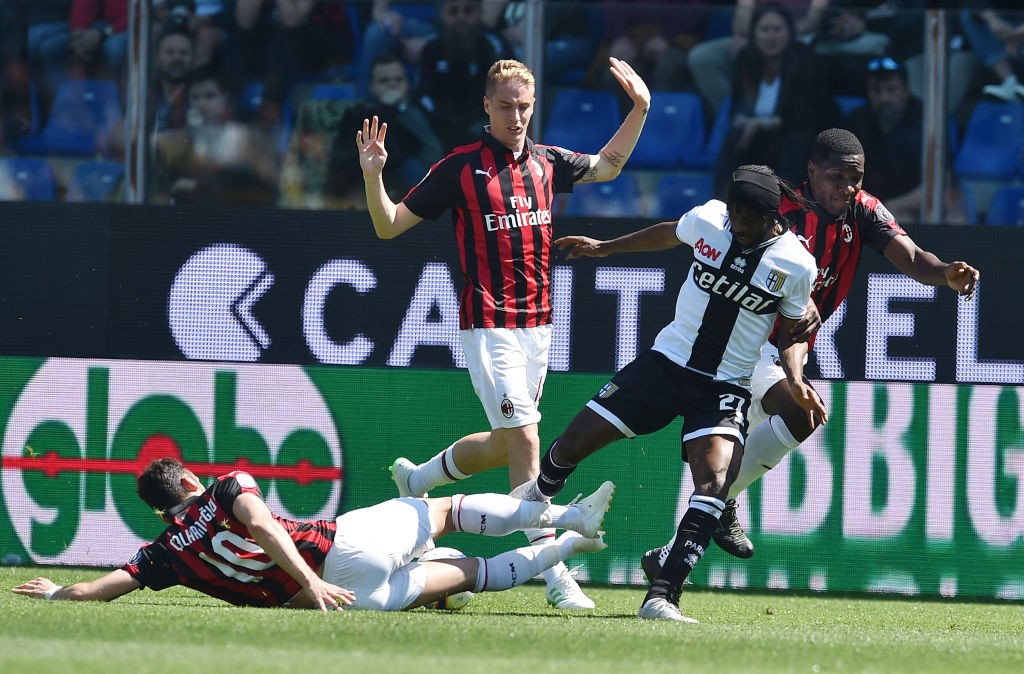 After completing a torrid run of games against sides in the top part of the table, Milan will be hoping to kick start a resurgence when they travel to face Parma on Sunday.

The Rossoneri go into the game currently sat in 13th place in the Serie A table but knowing that a win – plus a couple of other favourable results – could see them move back into the top half.

This is also arguably the point where the pressure will ramp up on head coach Stefano Pioli, who has not exactly passed recent tests with flying colours. His record so far is one win, two draws and three defeats.

The big news during the week has been the injury sustained by Leo Duarte, with Milan confirming that he will be out for up to four months after undergoing surgery to fix a problem with his achilles tendon.

That should present an opportunity for Mateo Musacchio to come back into the side after he himself also recovered from a muscle problem.

Pioli has somewhat of a logjam to contend with after Giacomo Bonaventura’s bright display against Napoli, with the usual left winger Hakan Calhanoglu back from suspension.

The latest indications regarding the starting XI suggest that Bonaventura will drop into the midfield with Calhanoglu back in on the wing, with Ismael Bennacer taking his spot back from Lucas Biglia and Krzysztof Piatek keeping his place up front.

Parma are enjoying their second season back in the top flight following their absence, and are currently sat four points above Milan in 8th, with 18 points from their opening 13 fixtures.

Their form over the last five games makes for interesting reading. An impressive 2-2 draw with Inter at San Siro was following up by a 1-0 home defeat to Hellas Verona and a 1-1 draw away at Fiorentina. They then outclassed Roma in a 2-0 win before drawing 2-2 at rivals Bologna.

Manager Roberto D’Aversa is set to welcome back star forward Gervinho but has numerous injury issues to contend with as Roberto Inglese, Yann Karamoh, Andreas Cornelius and Matteo Scozzarella will all miss out.

Parma are one particular opponent that the Rossoneri firmly have the upper hand on when looking back at previous meetings. The Gialloblu have won just three of their last 21 games against Milan, losing 14 with four draws.

You have to go back to October 2013 for the last time Milan lost a competitive game against Parma; a 3-2 defeat at the Tardini. In fact, the Diavolo have lost just twice away from home against the Crociati since 2005.

The last time the two sides met was towards the back end of last season when Milan – under head coach Gennaro Gattuso at the time – were in desperate need of a win for their top four hopes.

The one to watch for Milan will always be Krzysztof Piatek if he starts, because of the huge goalscoring crisis that the club finds themselves in.

However, Giacomo Bonaventura also deserves a mention due to his bright display on return to the starting XI against Napoli, which showed that he can still make a difference and lead by example in this team.

For Parma there is no doubt that Kulusevski is the man of the moment, despite having only just entered adolescence. At 19, the Swede has shown an eye for goal, a killer instinct and technical ability which has made some of Italy and Europe’s top clubs take an interest (Milan, take note).

The teenager has three goals and five assists in 13 league appearances so far, so Theo Hernandez and Alessio Romagnoli will have to be firmly on their toes on the left side of defence.

This will be by no means an easy trip for Pioli’s side to face a team who have looked strong and energetic so far this season in their bid to comfortably avoid the drop zone and maybe even achieve a top 10 finish.

However, we have seen improvements week on week under the new head coach, and this is the game where it is finally rewarded with an away win.